DEARBORN, MI - The 2011 Lincoln MKX is the newest vehicle in the automaker's lineup to offer best-in-class horsepower and torque and the best fuel economy of any luxury crossover vehicle on the market.

The 2011 Lincoln MKX received final fuel economy certification this week, achieving 19 mpg city and 26 mpg highway, with a combined fuel economy of 21 mpg, topping all competitors, including the Lexus RX350, Cadillac SRX and BMW X5, with not only horsepower but now fuel efficiency as well.

2011 Lincoln MKX vs. the Competition

*All numbers certified by the EPA. Best-in-class numbers in bold

The horsepower of the 2011 Lincoln MKX has increased to 305 - a 15 percent increase compared to the outgoing product - while torque has increased 12 percent to 280 lb.-ft.

"The Lincoln MKX doesn't sacrifice power to receive its great fuel economy," Kuzak said. "Our engineers were able to deliver an increase in power and torque in a fashion that reflects the luxurious driving experience that Lincoln is known for."

Lincoln's first-ever hybrid - the 2011 Lincoln MKZ Hybrid - was recently named the most fuel-efficient luxury sedan in America, delivering 41 mpg in city driving and 36 mpg on the highway. This tops the vehicle's nearest competitor - the Lexus HS 250h - by 6 mpg.

The 2010 Lincoln MKT with EcoBoostTM continues to provide better gas highway fuel economy - 21 mpg - than any other all-wheel-drive vehicle in its class. 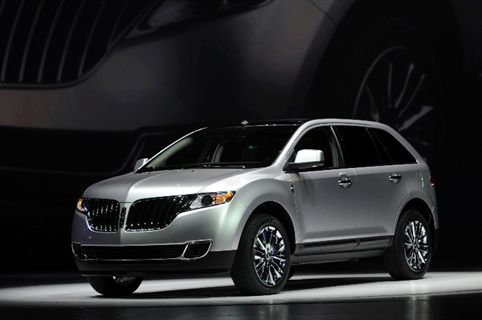 For the 2011 MKX, engineers integrated the new 3.7L V-6 engine, which uses twin independent variable camshaft timing (Ti-VCT) to increase the vehicle's power and fuel economy. The broadened torque curve allows the intake valve to be advanced, delivering about a 10 percent power increase compared to non-Ti-VCT engines. Variable timing control of both the intake and exhaust camshafts helps extract more energy from each drop of fuel, leading to a 4.5 percent improvement in fuel economy.

The engine also employs a control strategy called aggressive deceleration fuel shutoff to save fuel. This strategy shuts off the engine when the driver doesn't need engine torque. It uses the momentum from the torque delivered to the transmission to move the vehicle, rather than more fuel.

"The 2011 Lincoln MKX will continue to propel the Lincoln lineup that is already ahead of the curve," Kuzak said.

The 2011 Lincoln MKX continues to reinforce Ford Motor Company's record largest increase in fuel economy gains over the past five years, according to the EPA.

Read more about Lincoln 2011-MY