DEARBORN, MI - Lincoln's first-ever hybrid - the 2011 Lincoln MKZ Hybrid - is now officially the most fuel-efficient luxury sedan in America with an EPA-certified 41 mpg rating in city driving and 36 mpg on the highway, according to Ford.

"The 2011 Lincoln MKZ Hybrid provides a real choice in the marketplace for customers looking for a vehicle that not only makes a statement about who they are but also reflects their ideals," said Derrick Kuzak, Ford's group vice president, Global Product Development. "It offers the best fuel economy in its segment, a host of advanced safety features, and all the amenities and modern design of a true luxury sedan."

The 2011 Lincoln MKZ Hybrid's final fuel economy certification was completed this week, and the vehicle will carry an EPA label of 41 mpg for city driving and 36 mpg on the highway when it goes on sale this fall. It tops its nearest competitor - the 2010 Lexus HS 250h - by 6 mpg. It also trumps the Lexus HS 250h with room for one more passenger and more standard luxury and segment-exclusive safety features.

"The Lincoln MKZ Hybrid offers everything our customers look for in a midsize luxury sedan, plus unsurpassed fuel economy," said Kuzak. "Our engineers worked to ensure the hybrid electric motor and engine complement each other in a fashion that reflects the truly refined driving experience that is synonymous with the Lincoln name." 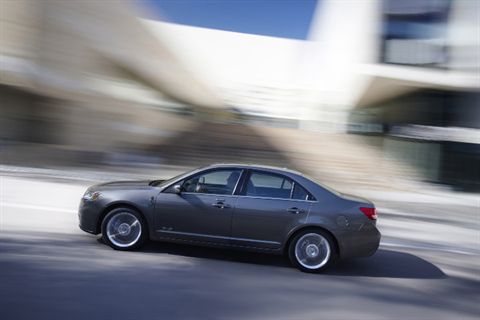 Building on Ford Motor Company's reputation as a world leader in electrified technology, the 2011 Lincoln MKZ Hybrid uses the company's second-generation hybrid technology - the 2.5-liter Atkinson-cycle I-4 hybrid engine - named one of Ward's 2010 "10 Best Engines." The system combines the best attributes of the gasoline engine and electric battery-driven motors to deliver optimal performance and fuel economy.