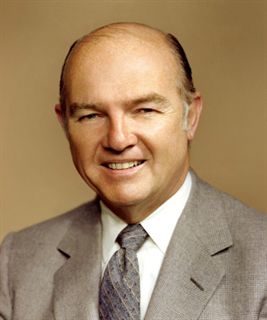 DETROIT - F. James (Jim) McDonald, former president and chief operating officer of General Motors Corp. throughout much of the 1980s, passed away June 13. He was 87.

McDonald's career spanned the post World War II auto boom. Among his many GM assignments, he served as general manager at both Pontiac and Chevrolet.

McDonald was named president and chief operating officer of GM Feb. 1, 1981, and served in those positions until his retirement on Aug. 31, 1987. During that period, he also served as chairman of the executive and administrative committees for the GM Board of Directors, and as a member of the finance committee.

As president, McDonald made improving GM quality a top priority. He opened a dialogue with UAW leaders that let to creation of the UAW-GM Quality Network, a new approach involving local plant and union leadership in efforts to improve product quality and customer satisfaction. The Quality Network continued long after McDonald's retirement.

Prior to being named president and chief operating officer, McDonald had been an executive vice president and member of the GM board with responsibility for car and truck, body and assembly, electrical components, mechanical components, power products, and overseas operations. He served as general manager for the Pontiac Motor Division from February 1969 through October 1972, when he became general manager of Chevrolet Motor Division, a position he held until he was named executive vice president and a member of the board in December 1974.

McDonald was born on Aug. 3, 1922 in Saginaw, Mich., and attended the General Motors Institute (now Kettering University), in Flint, Mich., under the sponsorship of the Saginaw Malleable Iron Division.  Upon graduation, he became an engineering officer in the submarine service and served aboard two submarines in the Pacific Theater.

After leaving the Navy in 1946, McDonald returned to Saginaw Malleable Iron and served in various engineering, sales, production and control, and manufacturing positions. He also served as works manager and as general manager of Detroit Transmission Division, which became Hydra-matic Division; as works manager of the Pontiac Motor Division; and as director of manufacturing operations for Chevrolet.

He is survived by his wife of 66 years, Betty; daughter Marybeth Cunningham; sons John and Tim; seven grandchildren, and four great-grandchildren.

A burial mass will be held June 17 at Holy Cross Catholic Church in Vero Beach, Fla.