HERNDON, VA - The 3.0L TDI that Audi uses in the A8 and now also in the Q7 is a thorough redesign. All that was carried over from the previous version of the engine are the 90 degree V, the cylinder spacing of 90 millimeters (3.54 in), and the displacement of 2,967 cc, according to the manufacturer. All major components are new developments - from the cylinder block to the crankshaft and from the forged connecting rods and the aluminum pistons to the cylinder heads.

Additional measures for reducing friction target the chain drive. Whereas the previous engine still used four chains and a toothed belt, only two chains are needed now. They drive the four camshafts with their narrow bearings, the balance shaft, the regulated oil pump and the common rail system's efficient high-pressure pump. Pressure of up to 2,000 bar is developed in the rails. The piezo inline injectors are equipped with eight-port nozzles. They activate extremely quickly and can inject fuel up to eight times per work cycle.

At the inlet of the intake manifold, made entirely of plastic, is a central swirler flap that swirls the air in the combustion chamber for efficient combustion, particularly at low engine speeds. The new flap replaces the individual swirler flaps in the intake ports of the previous engine, reducing pressure losses. The exhaust system and the charging air path of the turbocharged engine were also designed for low-loss flow. 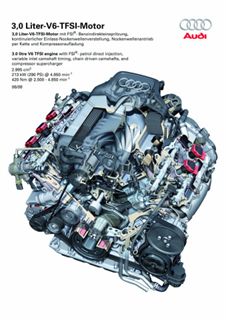 In the turbocharger, which theoretically can compress more than 600 cubic meters of air, the compressor shaft was mounted in new bearings. The friction-optimized sliding bearings ensure spontaneous initial response, particularly at low engine speeds. A fast electric actuator adjusts the turbine geometry so that the engine reacts spontaneously to the throttle.

The new 3.0 TDI is paired standard with a start-stop system. When the car comes to a stop at a traffic light or an intersection and the driver keeps the brake depressed, the system's control unit shuts down the engine. On a hill or a downgrade, the brake system maintains the brake pressure if the slope does not exceed than 10 percent. A powerful starter restarts the engine quickly and conveniently as soon as the driver lets off the brake.

The start-stop system works together with a particularly powerful battery that continues to function even at very low outdoor temperatures. It only allows the engine to continue running during the early warm-up phase so that the oil and the cabin come up to temperature more quickly. Fuel consumption in the EU cycle is reduced by around 0.3 liters per 100 km.