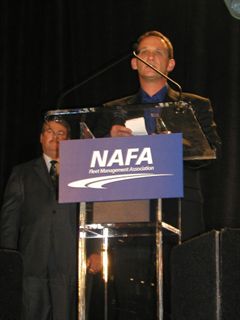 The Goill Award is presented each year to fleet managers whose innovative ideas have improved productivity or resulted in bottom-line savings for their employers.

Adamsky increased his fleet's fuel mileage by 10 percent, lowered fleet emissions, and enhanced driver safety by limiting his vehicles' top speeds - and accomplished all of this in just 10 minutes. By reprogramming all of his vehicle's electronic control modules to limit the vehicle's speed and simply having a technician plug in the system, his simple yet effective plan was underway.

Adamsky's solution eliminates fluctuations in fuel mileages based on individual driver behavior. Transferring performance accountability from the driver to the vehicle allowed Adamsky to gain more control of the fleet's fuel economy, and he was able to make changes that benefitted not only his company but the drivers and the environment as well.

According to Adamsky, his goal was to make the program profitable and realize a seven-percent savings in four months. When used across his 500-plus vehicle fleet, the vehicles saw a 10-14 percent improvement in fuel economy.

The NAFA/Bell Canada Larry Goill Memorial Quality Fleet Management Idea Award was named after Larry Goill, an active member of NAFA in the late '80s and early '90s. At the time of his passing in 1995, Goill was NAFA's vice president for Canada and the supervising engineer of Fleet Services for Bell Canada. The awards were sponsored by Bell Canada in appreciation for how much Goill added to that company's commitment to quality.

David Vasquez, currently manager of Fleet Operations for SECO Energy, was also honored for a strategy used when he was previously director of Fleet Maintenance for Lake County in Sumpterville, Fla. Vasquez developed a vehicle justification model to address the issue of take-home vehicles.