HERNDON, VA - The race to the top of Pikes Peak is among the most harrowing in motorsports, a flat-out sprint through 156 turns on a 12.4-mile road to the clouds. It is a test of grit and skill that demands the best from drivers as they brave perilous drops at 130 mph. Audi thinks it can do it without a driver, according to www.wired.com.

The German automaker will send an autonomous TTS barreling to the summit in September. It will navigate the course at race speeds - the best drivers make the run in around 12 minutes - with no one at the wheel or even in the car. No one's ever attempted anything like it before. Although robocars have driven the course, they haven't done it at more than 25 mph. Audi says it is pushing autonomous-vehicle technology to its very edge in an effort to make the cars the rest of us drive smarter and safer.

"We're interested in the safety opportunities this technology presents," said Dr. Burkhard Huhnke, executive director of the Electronics Research Laboratory. Volkswagen Group, which owns Audi, works alongside Stanford University at the lab in Palo Alto, California. "We want to understand the best way to use this technology to provide additional support to drivers in critical situations."

Audi, Volkswagen and Stanford are building on their success with Stanley, a VW Touareg that won the DARPA Grand Challenge in 2005, and Stanley, a VW Passat that took second in the DARPA Urban Challenge in 2007, according to www.wired.com. Those vehicles used radar, sensors, and cameras to track the road at relatively low speed on a closed and controlled course. The TTS will use differential GPS and an inertial measurement system to tackle a road where anything can happen.

"We're aiming high," said Chris Gerdes, director of the Center for Automotive Research (CAR) at Stanford. "Pike's Peak has been a challenge since the first race in 1916. It is a place where you have to push to the very limit, and there's a very stiff penalty if you get it wrong." 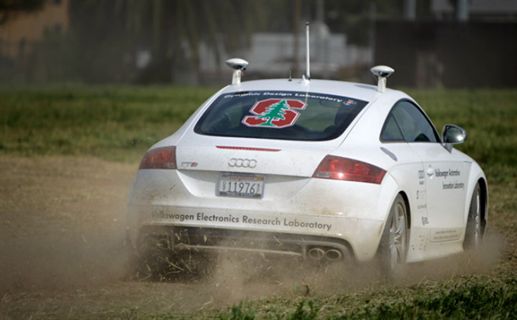 The car won't compete in the Pike's Peak International Hill Climb in June. But the all-wheel drive TTS will follow the same course the racers use. It's a mix of pavement, dirt and gravel that rises 4,721 feet at an average grade of 7 percent. The current record for a production-based all-wheel-drive car stands at 11:48.434. No one expects the TTS to hit that mark, and it won't achieve the kind of speeds rally driver Marcus Gronhölm or four-time winner Nobuhiro Tajima have, but it will make the run faster than you ever could.

"I want to go up the mountain much faster than anyone with any sense of self-preservation would go," Gerdes said.

The robocar is a 2010 TTS. The team chose it because it features a fly-by-wire throttle, adaptive cruise control, a semiautomatic DSG gearbox and other gadgetry. That made it relatively easy to make the car fully autonomous using electronics developed at the Electronics Research Lab.

"The components we added that actually interface with the car would fit in a shoebox," said Marcial Hernandez, a senior research engineer at the Electronics Research Lab. "The largest component by far is the gyroscope, and it's an 8-inch cube."

The TTS is named Shelley in honor of Michèle Mouton, an Audi rally driver and the first woman to win at Pikes Peak. Shelley uses differential GPS to track its location to within 2 centimeters; though Gerdes says the margin will be closer to 1 meter on the mountain. Wheel-speed sensors and an accelerometer measure its velocity and a gyroscope controls equilibrium and direction. The algorithms that make it all work run on hardware developed by Sun Microsystems.

"The computational power needed to do this is less than you'd find in your laptop," Hernandez said.

Redundant systems ensure a measure of safety, and Shelley can shut itself down if the system detects a problem. The car also transmits real-time data to the team, which can shut it down from up to 20 miles away.

"We're developing the car to drive itself right at the very limits of its performance," Gerdes said.

The question, of course, is why.

Audi believes autonomous systems could make cars safer, easier and more fun to drive. It isn't trying to remove the driver from the equation. Rather, it wants to create a car that can take over when you get in over your head. If, for example, you hit a patch of black ice, the car could take corrective measures to keep you from going off the road. Or if you blow it on a downhill double-apex turn, the car could bring itself back in line.

"The safety aspects of this technology are very important to us," Huhnke said.

And that, Gerdes said, is why Audi is testing the technology on Pikes Peak.

"We're modeling this on a race car," he said, "because we want to design a system that can assist even the best drivers."