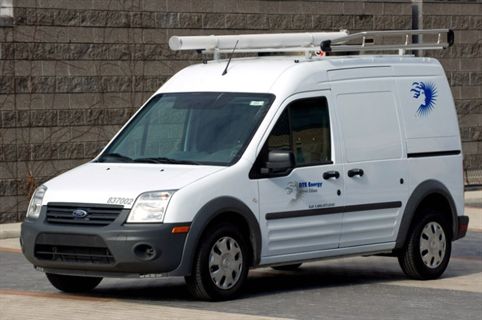 "What interested our team in the Ford Transit Connect was the fuel economy," said Gerard Huvaere, DTE Energy Fleet Operations. "It provides better fuel economy than many of the full-size pickup trucks and vans we have in our fleet."

According to Huvaere, the initial 19 Transit Connects are being used internally to transport materials from warehouses to various locations, to deliver interoffice mail and to move electric meters throughout the system. Some also are being used by the company's facilities maintenance personnel.

"The Transit Connect allows us to save upfront capital costs, and the fuel savings is tremendous," he said. "The trucks we replaced were older, and they were only getting 9 to 10 miles per gallon. We are achieving double that gas mileage with the Transit Connect."

Powered by a 2.0L I-4 engine with a four-speed automatic overdrive transmission, the Transit Connect delivers an EPA-estimated 22 mpg city and 25 mpg highway, according to Ford.

But fuel economy is not the only added benefit, said Huvaere.

"Many of the people who do our internal repairs take the vehicles home, so it's actually safer to keep all of their tools and equipment locked up in the Transit Connect instead of exposed in the bed of a pickup truck," he said.

According to Huvaere, DTE Energy personnel who have had an opportunity to drive the Transit Connect also like the extra headroom, the ability to access the vehicle from both the driver's and passenger's side, and the extra height in the cargo area. The front-wheel-drive Transit Connect also performs better in the Michigan snow, compared to the rear-wheel-drive pickup trucks.

Huvaere says DTE Energy is considering replacing some of the minivans currently being used by repair technicians who service homes and businesses with Transit Connects.

"The Transit Connect has more room, the same cargo capacity, and costs less money to operate," he said. "And our employees really like the way it drives and handles."