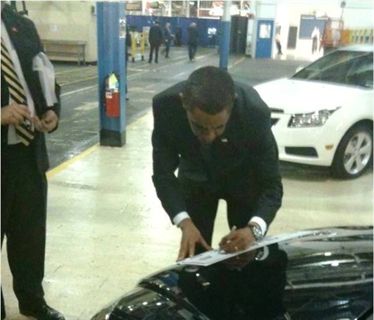 The President spoke to employees while surrounded by pallets stacked with engines and red, white, and blue bumpers. In a rousing campaign-like speech, he talked about the government's intervention in the auto industry.

"We intervened for one simple and compelling reason: Your survival and the success of our economy depended on making sure that we got the U.S. auto industry back on its feet," he said to a cheering crowd.

During his visit, President Obama recognized the Lordstown Complex team for the recent build of its one-millionth Chevrolet Cobalt and for the upcoming addition of a second shift. The President also penned a congratulatory note on a banner for the one-millionth Cobalt and signed the hood of a Chevrolet Cruze validation build with "The Car of the Future -- Barack Obama".

He also conducted a town hall meeting with about a dozen plant salaried and hourly employees who shared their thoughts and perspectives on a number of important issues facing the nation and the auto industry.