INGOLSTADT, BAVARIA – The 2008 Audi R8 MTM is a real Audi super car, a supercharged, 552-horsepower vehicle, according to www.edmunds.com. And thanks to supercharging, the 2008 Audi R8 MTM offers Lamborghini-caliber output from the 4.2L Audi V-8, some 552 hp and 428 pound-feet of torque.

The MTM-modified R8 accelerates to 100 km/h (62 mph) in 3.9 seconds, according to the manufacturer. A twin-screw supercharger is the key to the power boost. The result is the kind of surging accelerative force we’ve come to expect from upper-echelon super cars.

The 2008 Audi R8 comes fitted with Dephi’s MagneRide dampers, technology that has expanded from General Motors to the whole super car world, including the Ferrari 599 GTB.

The MTM version of the R8 features a carbon-fiber aero splitter, extended rocker-sill skirts, and rooftop spoiler, according to www.edmunds.com. There’s a rear aero diffuser for a measure of downforce, plus a glass engine cover. 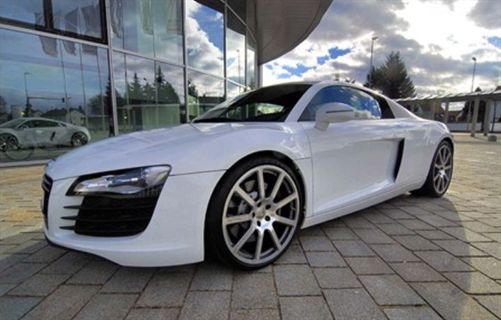