GREENSBORO, N.C. – The Volvo V70 and S80 are now also available with a five-cylinder, 2.5L turbocharged Flexifuel engine with a power output of 200 hp (147 kW) and 300 Nm of torque. Volvo Cars is launching Flexifuel cars on increasing numbers of markets. In addition to Sweden, which is by far the largest market, these models are sold in France, Norway, Italy, Finland, Germany, Austria, the Netherlands, Spain, Great Britain, Ireland, Belgium, Switzerland, and Thailand. Flexifuel cars are about to be introduced in more countries across Europe.

“The 2.5L version adds spice to our environmental offer. It emphasizes our aim to offer our buyers the possibility of combining performance with environmental responsibility,” said Fredrik Arp, president and CEO of Volvo Car Corporation. “With 200 hp on tap, the driver gets a dynamic drive without compromising fuel economy.”

The Flexifuel cars can run on E-85 bioethanol or 95-octane unleaded petrol — or any mix of these two fuels. Due to its lower energy content, fuel consumption when running on E-85 is 30-40 percent higher than when running on petrol. The exact difference depends on variables such as driving style, exterior temperature, and variations in the fuel specification.

Both the Volvo S80 and V70 have also been available with a 2L four-cylinder, naturally aspirated Flexifuel engine since the end of 2007. The 2.0F produces 145 hp (107 kW) and 185 Nm of torque. The Flexifuel variants of the Volvo S40, V50, and C30 have a four-cylinder 1.8L naturally aspirated engine, the 1.8F, which produces 125 hp (92 kW) and 165 Nm of torque. All engines and other relevant components have been adapted for driving on E85 through a number of modifications. 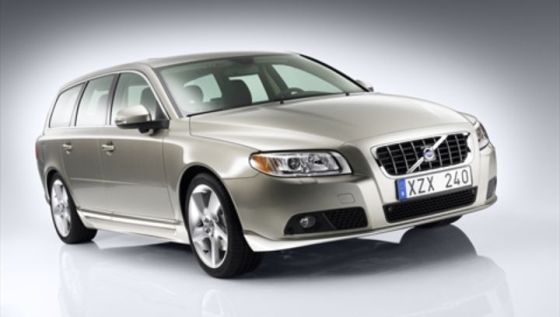 The Powershift transmission has been developed by Volvo Cars in cooperation with its transmission partner Getrag. Powershift operates in principle as two parallel manual gearboxes. It has twin wet clutches that work independently of one another. One clutch controls the odd gears (1, 3, 5, and reverse) while the other handles the even gears (2, 4, and 6). The two clutches operate alternately, with one engaging while the other disengages.

This means that at the same time as the engine gets full power and maximum thrust in first gear, second gear is placed in readiness to be engaged. And when second gear has been engaged, third gear is readied, and so on. This promotes a continuous flood of power without any disruption in power delivery or any torque loss, resulting in extremely fast and silky-smooth gearchanges while maintaining acceleration throughout the gearchanging process.