When John H. Fitch, Jr. succeeded Sidney Rose as executive director of the American Automotive Leasing Association earlier this year, AALA entered a new era in more ways than one. The association's headquarters were moved from Milwaukee to Washington D.C., and a commitment was made to expand the group's membership, enhance its services, and strengthen its participation in the increasingly important legislative arena. As an attorney and a former official in the Reagan White House, the 40-year old Fitch seems uniquely qualified to help AALA chart its course on all counts.

He then served as an Army officer in West Germany and Vietnam. In the years thereafter, Fitch worked as a legislative counsel to the Mississippi House of Representatives, as a trademark examiner in the U.S. Patent Office, and as attorney advisor in the U.S. Department of Justice. He also served as a senior vice president and lobbyist for two trade associations and, prior to accepting the AALA position, as deputy director of the White Hours Office of Private Sector Initiatives.

Fitch was interviewed recently in the association's new offices in downtown Washington, D.C. 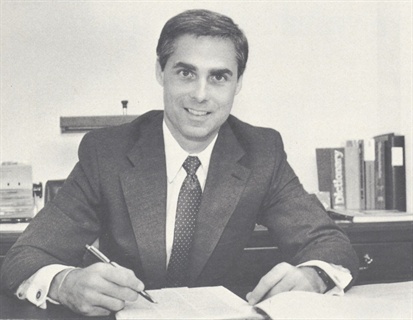 AF: You've been in the executive director's position for about five months now. What are your initial reactions to AALA and to the commercial automotive leasing industry?

FITCH: That's not an easy question to answer. Anytime you undertake a new venture, you go through a series of reactions: the initial ones, then the reflective ones, and ten the ones that will form the basis of the long-term relationship.

My initial reaction to the association was a simple question: "Where have you been for 30 years?" How could a group representing a major force in the U.S. economy have remained so hidden? As I came to know the association and had time to reflect, I discovered the answer. And I realized that the question itself was irrelevant. AALA was "on the move," and its new direction and philosophy would form the basis of my long term relationship with the association.

As for the industry, I started in relatively good shape. I understood the principles of financing commercial transactions and of value-added services from my years with the National Association of Wholesaler Distributors. I merely had to apply those principles to the commercial leasing business. However, it wasn't until I actually visited several lessors and viewed their operations that I realized how much more I had to learn. I am only now beginning to understand the competitiveness of this industry and the almost endless methods of doing business. It seems all lessors do business differently. What his me most about that aspect of the industry is its implication for AALA in the areas of legislation, seminars, education, and legal. The saving grace is the fact that, as I understand it, there are certain basic operational functions that are common to all commercial lessors.

Suffice it to say, my first months as AALA's executive director have been both educational and exciting.

AF: You mentioned that AALA is "on the move." What does that mean, and where is AALA going?

FITCH: First, of course, AALA has physically moved from Milwaukee to Washington, D.C. More importantly, however, is the fact that AALA is "moving" in a philosophic sense as well. In deciding to move the association to Washington and hire a full-time executive director and staff, the officers and board made a fundamental decision: AALA needs to become more active and aggressive in a legislative/public policy way, as well as in membership services and development.

AALA has begun to publicly recognize its role as the industry leader, and the responsibility that implies.

AF: Can you offer some examples?

FITCH: In June, the officers and board set broad, ambitious goals for the association where previously there were none. For instance, AALA is seeking to involve the membership more in the decision making and legislative/political process of the association. It is going to embark on an aggressive public relations/communications effort to inform and educate the members, the public, the press, and academia on the industry and its public policy positions. AALA is undertaking a rather significant effort to assess the needs of the membership, and respond to those needs in a qualitative way. AALA is committed to the establishment of a regional seminar program on topical issues of concern to commercial lessors and, at the same time, to improving and expanding the educational programming at the annual and mid-year meetings. In addition, AALA is exploring the option of hosting a major trade show at either the mid-year or annual meeting. And finally, AALA is exploring the concept of establishing a research arm and a formal, one-week executive management course at a major university to be run be the facility of the graduate school of business at the selected institution.

Given AALA's history, this represents a radical change in philosophy.

To sum up, the emphasis will be on communication, education, and participation. The focus, however, as always, is on quality. That is the one fundamental cornerstone that has been and will continue to be the factor that distinguishes AALA from any other industry group.

AF: How do you feel about the "new" AALA?

FITCH: I love it! I am excited and energized by the enthusiasm of the officers and board. And they're as excited as I am. The task is a formidable one, and it will take time to implement all the goals and objectives set by the board. But what's important is the fact that everyone is committed to succeed. That is another hallmark not only of AALA members as businesspeople but also of the association itself.

It is also a recognition by the board that these changes are a long time coming. They are necessary and reflect the changing nature of the industry and the external (and internal) pressures on commercial leasing companies.

I am very proud to be a part of this effort.

AF: Are there any other changes in the offing?

FITCH: Not in the macro sense as I have discussed previously. However, there are some lesser but important changes that are already taking place. One example is the monthly newsletter. As one can see, it is changed not only in format but also in content. The idea here is to inform and educate AALA members on substantive issues. While it will also focus on association activities such as meetings, its primary mission will be substance.

Next, AALA members will continue to receive Tax and Legal Advisories, as well as Legislative and Issue Alerts. These are designed to keep members alerted to issues and other matters on a more immediate basis than would be possibly by waiting for the monthly newsletter.

Another change that may occur is with the AALA logo. As you know, the current logo is identical to that of the American Car Rental Association and the Truck Renting and Leasing Association. The board feels that it no longer distinguishes AALA, nor does it reflect AALA's new energy. A decision on that could be coming soon.

AF: In closing, can you offer a personal perspective on your new position?

FITCH: I'd like to say that I am glad to be on board at a time when AALA is growing and moving into new areas and directions. I look forward to playing a role in that effort. I truly believe that AALA and the industry as a whole will benefit by our endeavors.