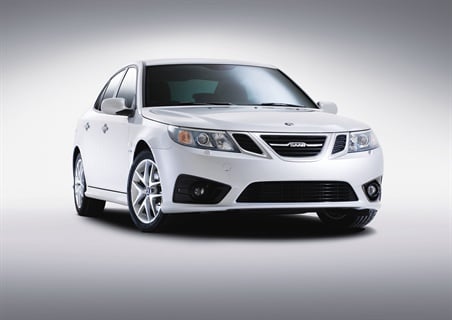 Since Dutch automaker Spyker Cars N.V. bought Saab from General Motors in February, Saab has been working on developing partnerships with manufacturers for major components. With a recent infusion of funding and ambitious plans for new models, Saab is looking toward the future with its product offerings.

Getting Back into Fleet

Saab's 9-3 is its most popular fleet product, according to John Gaydash, fleet and sales operations director for Saab. "It's probably the most logical choice for most fleets," he said, adding that it did particularly well in the pharmaceutical industry. "I think the primary reason was because the 9-3 was considered a premium European import and was attractive to the pharmaceutical companies from the perspective of offering to their 'road warriors' a vehicle that was  more upscale," Gaydash said.

Saab announced the MY-2012 9-3 Griffin lineup at the Geneva Motor Show in March. The lineup features a new 2.0L four-cylinder turbo engine - the same engine used in base 9-5 vehicle configuration, and includes direct injection, variable cam-phasing, twin-scroll turbo, E-85 capability in front-wheel-drive variants, and improved fuel economy over the previous engine, according to Saab. The 9-3 Griffin also features a new 6-speed automatic transmission and various interior and exterior changes (including standard equipment additions) from the previous model year.

Saab launched the 9-5, a brand-new, full-size sedan in the fall of 2010. The company will introduce the MY-2012 version this fall. In addition, production of its 9-4X crossover vehicle was expected to begin May 16 (as of press time), available starting at the end of June. Gaydash said he has seen some fleet interest in utilizing the 9-5 sedan and 9-4X vehicle in executive fleets.

Preparing for the Future

The automaker currently has plans in process for a ­next-generation 9-3 sedan on an all-new platform, planned for MY-2013. "That will be our first product since we've separated from GM, and it's our own unique platform," Gaydash said. The new platform will include engines provided by BMW, and potentially the E-power (all-electric) technology currently being tested in Europe.

The new platform will become the base platform for all next-generation product offerings, including the 9-3 station wagon and convertible, 9-4X, and 9-5 vehicles. 'We'll bring those products out over the next several years after we launch the new 9-3 in the fall of 2012," Gaydash said.

In preparing for the future, Saab has partnered with American Axle to manufacture an electric AWD system and ZF Chassis System to supply front sub-frames and complete rear axle assemblies for future vehicles.

In early May, the automaker made several announcements that bode well for its future: acquiring short-term funding from Gemini Investment Bank and the addition of Tim Colbeck, previously with Subaru, as president and COO for Saab Cars North America.