Converting to alternative fuels not only decreases greenhouse gas emissions, but can also lower fuel costs. Support from local and state governments in the form of rebates and parallel sustainability initiatives make the transition to alt-fuels easier. In addition, advanced technologies from various companies, such as electric vehicles with longer range that allow travel for a full workday in one charge, give companies more options than ever before.

Some large fleets that have made headlines with their alt-fuel truck purchases and green initiatives are highlighted.

PepsiCo's Frito-Lay North America division is piloting 21 all-electric trucks in 2010 on daily routes in New York City; Columbus, Ohio; and Fort Worth, Texas. The company expects to roll out 155 additional trucks in 2011.
The trucks, designed by Smith Electric Vehicles, generate zero tailpipe emissions and operate for up to 100 miles on a single charge.|

Mike O'Connell, director of fleet capability for Frito-Lay North America, said deployment of the planned 176 electric trucks will eliminate the need for 500,000 gallons of fuel annually.

The initial five-truck rollout in New York was funded through a grant from the New York State Energy Research and Development Authority (NYSERDA).

The 10-truck initial rollout in Columbus was facilitated through a partnership with Clean Fuels Ohio, a statewide non-profit organization working to advance Ohio's energy, economic, and environmental security. Frito-Lay received a portion of funding awarded to Clean Fuels Ohio from the U.S. Department of Energy. 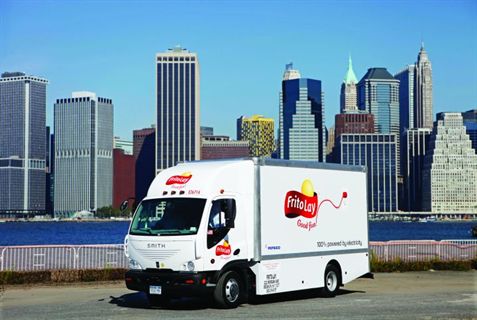 Cintas currently manages more than 10,000 vehicles in its North American fleet and maintains an approximate 15-year lifecycle expectation for its vehicles.

The 100 units will be deployed in Sacramento, San Leandro, and Ontario, Calif. Cintas will continue to evaluate further deployment of green fleet technology to additional Cintas locations in the U.S. and Canada.

The new hybrid-electric vehicles qualify for a $25,000 per vehicle credit under California's hybrid voucher incentive program.

FedEx Corp. expanded its alternative-energy fleet with its first all-electric delivery trucks in the U.S. Four purpose-built electric trucks hit the road in the Los Angeles area in June, joining more than 1,800 alternative-energy vehicles already in service for FedEx around the world, according to the company.

Two of the new all-electric trucks come from Navistar, based on the Modec design already operated by FedEx in Europe. Another pair of electric vehicles was purchased from a different manufacturer. Both sets of electric vehicles are designed with a range that allows many FedEx Express couriers to make a full eight-hour shift of deliveries before their vehicles need recharging. 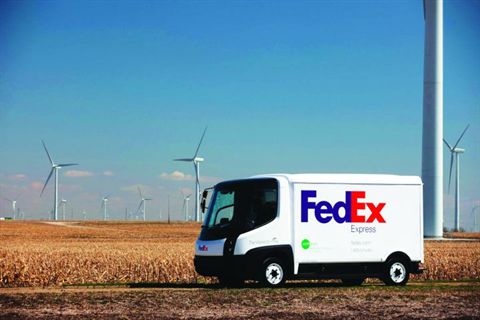 A FedEx-branded prototype all-electric truck from Navistar was operated for FedEx customers, employees, and local officials on a tour along historic Route 66 between Chicago and Los Angeles from March to May.

In addition, FedEx Express ordered 51 gasoline-electric hybrid vehicles at the end of last year to add to its total fleet of hybrid electric and electric vehicles. Most of the new gasoline-electric vehicles, provided by Azure Dynamics, were put into service at a Bronx, N.Y., station, making it the first FedEx all-hybrid facility with about 100 trucks, according to the company.

Verizon announced the addition of 300 compressed natural gas (CNG) vans in California, more than 260 hybrids in New Jersey, and 25 hybrid pickups and five CNG vans in New York in October, the company's latest efforts to meet its goal of operating more than 1,600 alternative-fuel fleet vehicles by the end of 2010.

In Westchester County, N.Y., 25 hybrid pickups and five CNG vans are being deployed as part of the more than 270 alternative-energy vehicles Verizon is adding to its New York fleet this year. The Chevrolet hybrid pickups will be used by FiOS (fiber optic service) and customer-service technicians and are expected to reduce CO2 emissions by 43 percent over the conventional gasoline-powered vans they replace. The CNG vans are expected to reduce CO2 emissions by more than 20 percent and carbon monoxide by more than 90 percent.

For its California truck fleets, Verizon contracted with Steelweld Equipment Co., to convert 300 gasoline-powered Ford E-250 cargo vans to CNG, which is expected to reduce carbon emissions by 480 tons per year. The retrofitted vans will be used by technicians in Southern California.

Hybrid aerial bucket trucks replace the diesel generators used in conventional bucket trucks with batteries that can be recharged by the vehicle. This will save about one gallon of petroleum fuel consumption per hour of operation and reduce six to 12 metric tons of CO2 emissions annually per truck, depending on usage, according to the company. 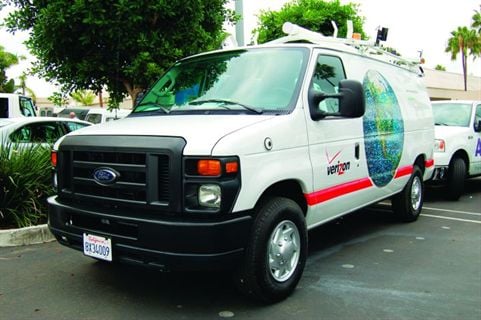 The 130 hybrids will all be deployed in 2011, with 30 going to New York and New Jersey and 100 to California. UPS estimates these vehicles will save 66,085 gallons of fuel and 671 metric tons of CO2 annually, representing a 35-percent improvement in fuel economy - the equivalent of 128 passenger cars being taken off the road, according to UPS.

UPS already operates 2,022 alternative-fuel vehicles in its fleet as of October. The company has invested more than $25 million to develop its alt-fuel fleet, which includes compressed natural gas, liquefied natural gas, propane, and all-electric.

UPS introduced a hybrid-electric vehicle into daily operation with a research program in early 1998. Currently, 250 UPS hybrid-electric delivery vehicles are operating in the U.S.

The hybrid fleet features two different size vehicles from Freightliner Custom Chassis Corporation and a hybrid drive system from Eaton Corporation. The external truck bodies are identical to other UPS signature-brown trucks, with additional labeling identifying them as hybrid electrics.

In addition, UPS began a 90-day demonstration trial in early September of a fully electric walk-in van from Electric Vehicles International. The van is built on a Freightliner Custom Chassis Corporation (FCCC) glider equipped with a Utilimaster body.

AT&T deployed its 2,000th alternative-fuel vehicle and 1,500th compressed natural gas (CNG) vehicle in its corporate vehicle fleet in July, after reaching the 1,000th alt-fuel vehicle milestone in February. These milestones are part of a $565 million planned investment announced in March 2009 to replace more than 15,000 fleet vehicles with alternative-fuel models through 2018. The AT&T corporate fleet includes more than 75,900 vehicles.

AT&T anticipates purchasing approximately 8,000 CNG vehicles over a five-year span at an anticipated cost of $350 million. AT&T expects to spend an additional $215 million through 2018 to replace 7,100 fleet passenger cars with alternative-fuel models. According to the Center for Automotive Research (CAR), AT&T's alternative-fuel vehicle initiative will save 49 million gallons of gasoline over the 10-year deployment period and reduce carbon emissions by 211,000 metric tons - the greenhouse gas equivalent of removing more than 38,600 traditional passenger vehicles from the road for one year, according to the company.

Prime Time Shuttle made the switch to propane autogas with the addition of propane-powered Ford E-350s to its fleet.

The company announced in June it would replace its existing fleet with 200 ROUSH propane-powered shuttle vans within 24 months. Each traditional shuttle van consumes more than 7,500 gallons of gas annually. ROUSH expects that by switching to propane autogas, Prime Time Shuttle will save more than 1.5 million gallons of gasoline each year.

Propane autogas is produced domestically and has a national infrastructure already in place. It burns cleaner than traditional fuels, with up to 20 percent less nitrogen oxide, up to 60 percent less carbon monoxide, 24 percent fewer greenhouse gas emissions, and fewer particulate emissions when compared to gasoline, according to ROUSH.