In March 2009, AT&T announced it would invest up to $565 million as part of a strategy to deploy more than 15,000 alternative-fuel vehicles by 2019. According to company statistics, AT&T currently operates more than 77,000 vehicles.

The company's 15,000 alt-fuel vehicle goal will displace 2.5 million barrels of oil, reduce carbon output by 211,000 metric tons, and create or save 5,500 jobs, according to the Alternative Fuel Vehicle Institute.

The communications giant expects to spend an estimated $350 million over five years to purchase approximately 8,000 compressed natural gas (CNG) vehicles. The company is also working with natural gas service providers to build up to 40 new CNG fueling stations across its operating region to provide the infrastructure needed for the new vehicles.

AT&T's green fleet plan includes an approximately $215 million investment to replace 7,100 fleet passenger cars with alternative-fuel models. The measure will save 49 million gallons of gasoline over 10 years, according to the Center for Automotive Research. 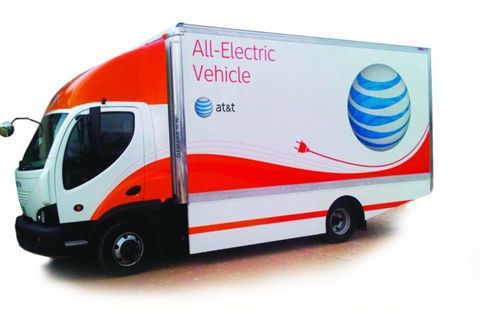 Other sustainability measures AT&T implemented include an idling reduction policy and promoting eco-smart driving habits among its company drivers.

1. Learn before you leap.

AT&T's 2009 commitment to investing in an alternative-fuel fleet followed deployment of 105 alternative-fuel vehicles in 2008 and an earlier trial of four hybrids in California in 2007. "Through these successful pilot programs, we learned that a mix of solutions is right for our fleet," said Dugan.

2. Match the fuel to the fleet.

"We require a fleet with multiple vehicle types, and we believe there are multiple technologies that can reduce our operating costs over time while effectively reducing our fuel consumption and impact on the environment," Dugan explained.

From a 2008 pilot program, the company learned CNG and hybrid-electric vehicles work for its business applications, particularly since the technology is more readily accessible. "As alternative-fuel technologies evolve, we'll continue to explore them to determine if they're right for our company," said Dugan.

3. Make sure it makes sense.

For example, CNG is suitable for the AT&T fleet, said Dugan, because it is "cost-effective, cleaner-burning, and readily available in our country.

Additionally, CNG vehicles provide a reduction in carbon emissions - approximately 25 percent compared with traditional gasoline vehicles - and that supports our corporate commitment to reduce our impact on the environment."

The three brands' fleet comprise primarily ½-ton pickup trucks, 1-ton pickup trucks), low-cab-forward cab chassis, and cutaway cab chassis.
After research and consultation with internal customers, including vehicle operators and management, Steffen developed ServiceMaster's "Green Fleet Initiative Plan" in early 2006. The document, which included 10 pages of information, outlined "where we wanted to be with the green fleet initiative in 10 years and beyond."

Steffen also worked with the company's VP of environmental stewardship, Jamey Jones, to ensure it aligned with other sustainable initiatives, such as facility design, and then received buy-in from the CEO.

With Phase 1 completed, the plan's Phase 2 (years 3-6) begins this fall. Steffen will work with suppliers of hybrid-electric powered trucks in the 12,000-14,000-lb. GVW range for use with lawn service units. He will also investigate other alt-powered vehicles, including a plug-in hybrid-electric cargo van and all-electric trucks.

All-electric vehicles present other issues to work through, such as overnight charging stations that must be set up at branch locations, Steffen pointed out.

"I'm weighing the return on investment now," he said, balancing the price and operating expense of a conventional truck with the increased acquisition cost and power costs of a pure-electric vehicle. He must also consider whether the pure-electric truck can meet the  application's daily workload, which includes traveling 50-60 miles.

In time, he thinks a business case can be made for the alt-powered truck, but requires more operating data from the supplier.

During the green fleet plan Phase 3 (year seven and beyond), ServiceMaster will explore technology not yet available, said Steffen.

Technologies explored will include hydrogen-fueled internal combustion engines, fuel cells, and solar energy to extend the range of pure-electric vehicles, which may be advanced enough for use in 5-10 years, he explained.

● Develop a well-researched plan. "Do your homework," said Steffen.
● Frame the plan in a timeline of short-, mid-, and long-term phases, "because technology changes," Steffen noted.
● Consult customers. Solicit input from vehicle operators, management, and other relevant parties, Steffen recommended.
● Get buy-in from key high-level management. "Build and present a 'defensible' business case."