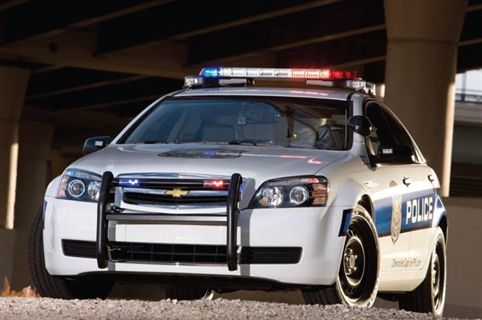 Nearly one year after a near collapse of General Motors and subsequent Chapter 11 bankruptcy, Chevrolet is re-emerging as a major player in the law enforcement fleet market with the release of its all-new Chevrolet Caprice Police Patrol Vehicle (PPV).

The 2011 model offers a modern, full-size, rear-wheel drive vehicle option designed to meet the rugged needs of law enforcement officials throughout North America. The PPV sedan will offer both six- and eight-cylinder engines, as well as a host of specialized equipment and features.

Not Just a Badged-Over Civilian Model
Chevrolet made the announcement at the annual International Association of Chiefs of Police (IACP) convention in Denver in early October. The Caprice PPV will be available for ordering next year and will hit the streets in early 2011.

“The new Chevrolet Caprice police car is the right tool at the right time for law enforcement,” said Jim Campbell, general manager for GM Fleet and Commercial Operations. “We asked for a lot of feedback from our police customers, which helped us develop a vehicle superior to the Crown Victoria in key areas.”

The 2011 Caprice PPV will be available in two configurations: a 355-hp V-8 that generates an estimated 384 lb.-ft. of torque and a tamer V-6 model. An unmarked version will also be available.

Unlike other police cars on the market, the Caprice PPV is not based on a existing “civilian” passenger-car model sold in North America, according to GM. The vehicle has been developed in key areas specifically for police duty, containing modern equipment and features.

One of the most notable features is a 6.0L V-8 engine with GM’s Active Fuel Management technology. Capable of running on E-85, the vehicle also delivers 0-60 acceleration in less than six seconds. This technology improves gas mileage during “cruising” by dropping out four of the engine’s eight cylinders, making the car essentially a V-4, but functions as an eight-cylinder when needed, said Brian Goebel, Chevrolet communications manager. By 2012, a V-6 model will also be
available.

Safety is a major emphasis of the 2011 Chevrolet Caprice patrol vehicle. It will offer law enforcement officials optional front-seat only side-curtain air bags. This will allow a full-width rear-seat barrier for greater officer safety. Two truck-mounted batteries will offer the availability to power various police equipment within the vehicle.

The Caprice is designed for five-passenger seating, meaning the upper-center section of the instrument panel can be used for equipment mounting without the concern of air bag deployment interference.

Designed for a Better ‘Fit’
“Along with Impala and Tahoe, the Caprice PPV gives agencies a greater range of choices for police and special service vehicles available from Chevrolet,” said GM’s Vice President of Global Chevrolet Brand Brent Dewar. “We recognize the unique needs of law enforcement agencies and feel we have developed a car that offers [those clients] the features they need.”

The V-8-equipped model will offer this “segment-leading top speed” and sports car-like performance, according to Chevrolet designers, because it is built on the same platform as the new Camaro. It uses the longest wheelbase of the architecture — 118.5 inches — in addition to a four-wheel independent suspension delivering responsive high-performance driving characteristics crucial in law enforcement scenarios.

While fuel economy has always been a concern of such high-performance law enforcement sedans in the past, GM believes the Caprice PPV will offer excellent fuel economy.

Designed specifically as a patrol car, the vehicle design includes substantial interior room. According to the manufacturer, the Caprice offers 112 cubic feet of interior volume.

The front seats are sculpted to “pocket” the equipment belt, which greatly increases comfort for a greater range of police officer sizes. The foam density of the seatback and cushion insert surfaces are designed to conform to the shape of an equipment belt’s various items, allowing the officer’s back to rest properly on the seat-back surface.

Police vehicles often serve as a remote office for many officials. Increased comfort has long been one of the most primary needs of officers based on customer feedback, Dewar said.

“The shape also enhances entry and egress, making it easier for officers to exit the vehicle quickly. The seat-back bolsters, for example, have been purposefully contoured to pocket equipment on an officer’s belt, including a gun, Taser, and handcuffs, which rest comfortably in the sculpted lower bolsters,” said Bob Demick, lead seat design manager. “That also increases the longevity of the trim cover surface.”

In addition to comfort considerations, seat construction materials were carefully selected by GM engineers, Demick said. The high-wear materials stand up to long hours of everyday use and provide long-term durability and ease of cleaning.

Engineers worked on several iterations of the seat, testing versions in the field for real-world feedback from police officers who used prototype seats in their cruisers for a month. Their input helped determine the final design, Demick said.

A host of complementary features are also offered, including special equipment packages such as spotlights, lockouts for power windows and locks, and an unmarked street-appearance package, Dewar said.

To enable more room for interior equipment, the standard radio can be relocated to the trunk, allowing for an in-dash, touch-screen computer.

Chevrolet has provided law enforcement fleet vehicles since the late 1950s. In 1986, the Caprice name replaced the Impala. That first Caprice included a 5.7L small-block V-8. Eight years later, a 260-hp V-8 engine was offered in a new Caprice 9C1 model, making it one of the fastest full-size police cars ever offered.