No fleet manager would allow a driver to perform even a slightly reckless maneuver on a public thoroughfare. However, such driving maneuvers in a cordoned-off stadium parking lot can provide an ideal learning opportunity, benefiting both drivers and fleets, a fleet manager and a driver training expert agreed.

A global integrated water treatment and process improvement company, Nalco Co., has put more than 300 drivers through such training sessions since June 2007. Drivers steer through slalom courses, slam on the brakes, and learn what it feels like to lose — and regain — control of a vehicle.

By the end of 2008, Nalco expects to have sent another 300 drivers through the course, said Brian Bonds, global safety, health and environmental administrator for Nalco. Headquartered in Naperville, Ill., the company’s worldwide workforce numbers 11,000, serving 70,000 customers in 130 countries.

“We were doing more in-classroom training where drivers receive a lot of good principles, but we wanted to go beyond the classroom,” said Bonds, who has taken the course. “The in-vehicle driving course really shows how your car handles in a variety of situations.”

Drivers are told to accelerate to a specific speed before slamming on the brakes and steering through a tight turn, Bonds said.

Such exercises build driver confidence in avoiding obstacles and familiarity with anti-lock braking systems (ABS), Bonds said. Many drivers aren’t familiar with the sensation of an activated ABS. Some drivers have said it feels like a small hammer is tapping against the bottom of the driver’s foot as the driver presses hard on the brake pedal. The eight-hour session Nalco drivers take, which includes classroom instruction, ends with a turn in the “slide car,” a specially equipped vehicle used to teach driving in slippery conditions. Drivers are instructed in regaining control of a vehicle, Bonds said.

As important, the course covers how to check tire pressures and adjust mirrors and the driver’s seat “so you can actually see 180 degrees behind your car,” Bonds said.

The course is conducted by Driving Dynamics at sites around the country. Nalco employees sign up via the Driving Dynamics Web site, choosing a local venue from a list. They use their company vehicles, which include such Ford models as the Five-Hundred, Escape, and F-150 pickup. 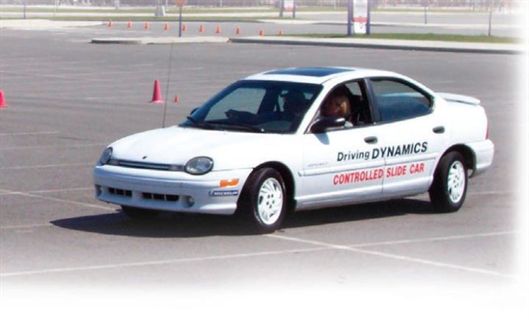 Most drivers overrate their driving skills, said Boyd Smith, sales director for Driving Dynamics, based in Little Silver, N.J. “There are some bad habits out there,” Smith said. “Texting while driving is a huge problem.”

Those who do it steer with one hand and type with the other, Smith said.

Drivers have told him they can text without looking at a cell phone’s keys.
“But they have to look to see what it is they’re responding to,” Smith said. “When they pull their eyes off the road at 60 miles per hour to look at a message for two seconds, they’ve covered 176 feet.”

Corporate policy should clearly state prohibitions on cell phone use while driving apply to all use of such devices, including texting, Smith advised.