Medium-duty trucks are most often used for door-to-door delivery services, package delivery, and the trash pickup business. They are also used as onsite work trucks, powering cranes and lifts. These services, with short runs and lots of idling, are ideal for transformation by hybrid technology.

Over the past few years, Eaton Corp. in Cleveland has been developing hybrid drive systems for commercial trucks. Eaton has been working with the major medium-duty truck manufacturers and two package-delivery companies that develop their own trucks. These commercial diesel-electric hybrid trucks have been under development for several years and will reach the market in 2008.

As far back as February 2006, UPS announced it was placing an order for 50 hybrid-electric vehicles (HEVs). Two sizes of the HEVs are available from International Truck and Engine and Freightliner LLC. The trucks feature lithium-ion batteries capable of faster recharging and with longer battery life than previous HEV generations. The truck body exteriors are identical to the current signature-brown UPS trucks.

At about the same time, FedEx announced that FedEx Express, a subsidiary of FedEx Corp., planned to add up to 75 hybrid diesel-electric trucks to its service fleet over the ensuing 12 months, contingent upon pricing and availability. The announcement coincided with the unveiling of two FedEx hybrid trucks in Washington, D.C., which brought the company-wide total of hybrid trucks in use to 18.

Bellevue, Wash.-based PACCAR, the corporate parent of Kenworth and Peterbilt trucks, has announced that medium-duty trucks from those brands will be offered with hybrid drive systems in calendar year 2008. The makers of Freightliner and Volvo trucks have also announced medium-duty hybrid trucks.

Because medium-duty trucks make short trips and accelerate and brake more often in city traffic, there is more opportunity to take advantage of hybrid technology than with sustained driving. For that reason, most of the effort to commercialize hybrid technology in trucks is focused on medium-duty vehicles, rather than Class 8 or heavy-duty trucks.

The medium-duty system Eaton is putting into production uses an electric motor and generator situated between the output of an automated clutch and the transmission input. Main engine operation regenerates storage batteries, which also capture and hold energy normally dissipated during braking.

The system is based on Eaton’s Fuller semiautomatic transmission, which each chassis manufacturer will use with its own engines, according to James Sweetnam, president of Eaton’s Truck Group. It will not be available with standard transmission.

An advantage to the system is that the power from the lithium-ion batteries can be channeled into a power takeoff (PTO) for stationary activity. While PTO is operating, the diesel engine periodically turns on to recharge the batteries, which Peterbilt said takes less than five minutes. This eliminates continuous long-term idling when, for example, a crane or lift truck is in use onsite.

“Eaton recognizes that to be commercially viable, hybrid-powered vehicles will need to deliver significant fuel savings and environmental benefits,” the company reported. “We are convinced that the most successful hybrid products will have the lowest price premiums compared to conventional vehicles as well as demonstrate exceptional reliability ‘out-of-the-box.’ ” 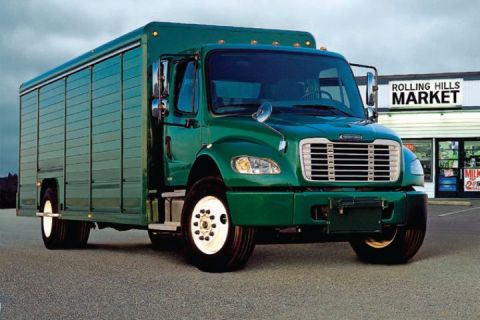 Peterbilt’s Model 335 hybrid-electric combines a PACCAR PX-6 engine (260 hp, 560 ft.-lb. torque) with Eaton’s proven hybrid-electric drive system. With the hybrid system engaged, horsepower increases to 300 and torque to 860 ft.-lb. This configuration is ideal for stop-and-go use, such as urban pickup and delivery. The company says the vehicle can demonstrate up to a 40-percent greater fuel economy by using electric power to help accelerate the vehicle from a stop.

The Model 335 hybrid utility truck features a Terex TC-55 Hi-Ranger Body and is also powered by the PX-6 engine, which regenerates lithium-ion batteries to electrically operate the PTO and is ideal for municipal and utility applications. The system can produce up to a 40-percent improvement in fuel efficiency when on-road fuel economy gain is combined with utilizing the batteries to operate the truck body.

The Kenworth Class 7 hybrid can carry a payload of up to 16,000 lbs. It features a PACCAR PX-6 240 hp engine, integral transmission-mounted motor/generator, frame-mounted 340-volt battery, and dedicated power management system.

Above 30 mph, the Kenworth hybrid operates like a standard diesel vehicle with all power coming from the engine during steady driving conditions. Below 30 mph, the system automatically switches between diesel and electric operation. Electricity generated through regenerative braking is stored and used for acceleration, assisting the diesel engine.

PACCAR and Eaton Corp. recently announced an agreement to jointly develop proprietary hybrid technology for heavy-duty commercial vehicles in North America. The technology will be introduced in Peterbilt Class 8 trucks, targeted for initial production by the end of 2009.

PACCAR is also promoting what it calls the Clean Power (Kenworth) and Comfort Class (Peterbilt) systems, which use a battery-charging system while the truck is rolling. When the truck is parked, the battery can run heating and cooling systems and electrical accessories for hours without idling the engine.

PACCAR says using that system in place of the national average of 1,850 idling hours per truck per year can produce an 8-percent improvement in fuel efficiency.

Eaton is also working on a hydraulic propulsion system to replace the conventional drivetrain and transmission. Hydraulic pump, motors, and storage tanks recover and store energy, similar to what is done with electric motors and batteries in HEVs.