In addition to reducing dependency on petroleum imports, alternative, cleaner fuels play a key role in addressing worsening environmental problems caused by rising consumption of conventional fuels. Propane is rapidly establishing itself as an important alternative fuel with its impressive environmental benefits and inherent practical and cost advantages over gasoline, diesel, and other alt-fuels.

Propane, also known as liquefied petroleum gas (LPG), is one of the nation's most versatile sources of energy, supplying about 4 percent of total domestic energy needs and fueling more than 10 million vehicles worldwide. 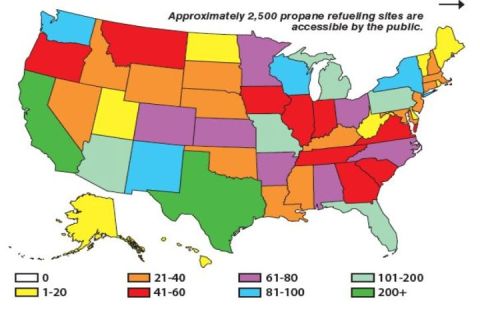 Approximately 90 percent of the U.S. propane supply is produced domestically, while the majority of the remaining 10 percent is imported from Canada and Mexico. Approximately 55 percent of propane is produced from natural gas processing and 45 percent comes from the refining of crude oil. Thus, propane is a readily available, secure energy source whose environmental benefits are widely recognized. Propane is also an approved, alternative clean fuel listed in the 1990 Clean Air Act, as well as the National Energy Policy Act of 1992 and 2005.

Propane has a remarkable safety record, due in large part to the stringent codes and regulations developed by the propane industry and the National Fire Protection Association (NFPA). Among propane use benefits are:

Propane has long been recognized as a "green" energy. Nontoxic and insoluble in water, propane use can help cut emissions and protect the environment. Because it is released as a gas, it does not spill, pool, or leave a residue.

Propane exhaust creates 60- to 70-percent less smog-producing hydrocarbons than gasoline, according to studies by the Southwest Research Institute (SWRI).

Propane cuts emissions of toxins and carcinogens such as benzene and toluene by up to 96 percent compared to gasoline, according to studies by the SWRI.

Infrastructure. The cost of building propane fueling stations is similar to, or lower than, comparable-sized gasoline dispensing systems. Propane refueling facilities are designed in compliance with nationally recognized standards and local building and fire codes, which must follow stringent safety regulations and are commonly deployed throughout the country.

Operating costs. Propane offers fleet operators distinct economic advantages over conventional gasoline and diesel fuels. The Battelle Memorial Institute found that propane is the most economic alternative fuel for fleets (on a per-mile basis) when operating, ownership, and infrastructure costs are considered.

Operating costs associated with propane fleets typically range from 20- to 40-percent less than those of gasoline-operated fleets. From an economic perspective, propane is the most cost-effective alternative to conventional transportation fuels when capital costs (vehicle and infrastructure) and operation and maintenance costs are all taken into consideration. Of all available alternative fuels, it also offers the best mix of vehicle driving range, durability, and performance.

The up-front costs of propane fleet vehicles can be offset by lower operating and maintenance costs over the lifespan of the vehicles. The time it takes for these savings to offset capital costs (payback period) depends on vehicle usage patterns, specifically, the average distance traveled monthly or annually. Fleet vehicles typically travel long distances and have very high fuel consumption, so the payback period on propane fleet vehicles can be very reasonable.

The Future of Propane Motor Fuel

In 2005, the propane industry turned a corner and began focusing on all engine fuel applications as a cohesive segment. Creation of the Engine Fuel Advisory Committee within the Propane Education & Research Council (PERC) strengthened the industry's focus on all viable engine fuel applications and the business models that demonstrate merit to propane marketers and customers alike. The propane industry has adopted a comprehensive approach to market development through R&D, safety and training, partnerships and relationships, and consumer education. 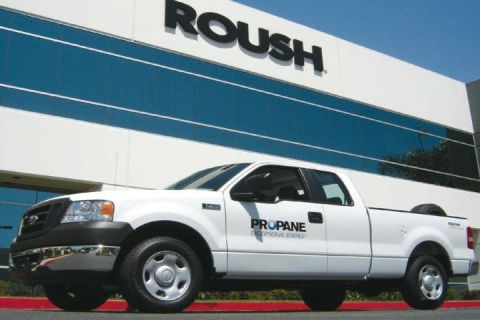 The industry approach focuses on developing 50-state certified vehicles for specific niche market opportunities in collaboration with OEM partnerships. These partnerships reduce costs to establish Tier-II OEM vehicle platforms that come off the assembly line on gasoline and proceed to OEM-sanctioned Tier-II upfitters (Monroe for GM and Roush for Ford) to produce propane vehicle models that make the most sense. This multimillion-dollar investment demonstrates the propane industry's commitment in developing a new generation of OEM products to overcome the high cost of government regulations, while meeting or exceeding EPA and CARB certification criteria for durability and lower emission standards.

The LPI 8.1L platform is currently available in GM cab chassis configurations from 17,500- to 33,500-lb. GVW platforms, as well as the 2008 propane-powered Blue Bird Vision school bus. PERC and the propane industry have created a dynamic market strategy and template by building on industry and OEM relationships to develop OEM and/or Tier-II OEM products with a unique master dealer program. The program establishes service, maintenance, and warrantee support programs for dealers, fleet customers, and consumers.

Further information on propane and its uses can be found at:

Brian Feehan is vice president of the Propane Education & Research Council (PERC). He can be reached at [email protected]