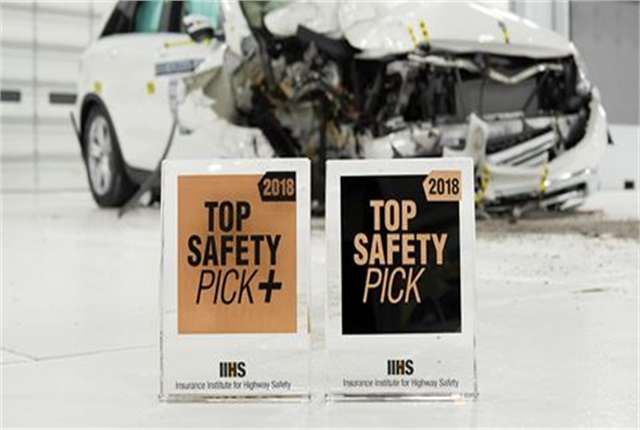 Because of more stringent award criteria, just 15 vehicles have thus far qualified for the 2018 Top Safety Pick+ award from the Insurance Institute for Highway Safety, the organization announced.

The majority of winners qualify only when optionally equipped because front crash prevention and “acceptable”-rated or “good”-rated headlights aren’t part of their base trims.

IIHS releases vehicle test ratings as it evaluates new models, adding to the list of award winners throughout the year. The Top Safety Pick award dates back to the 2006 model year. But the passenger-side crash test is a new requirement. The institute released its first official passenger-side ratings in October, following research tests last year.

“Drivers expect that their passengers, who are often family, will be protected just as well as they are,” said IIHS President Adrian Lund. “Manufacturers have been taking this issue seriously since we first shed light on it, and we’re confident that good small overlap protection will become the norm on the passenger side, just as it has on the driver side.”

“Headlights have long been treated as design elements instead of the critical safety equipment that they are," Lund said. “We're pleased to see this changing. Every one of the 62 award winners for 2018 is available with headlights that are at least acceptable.”