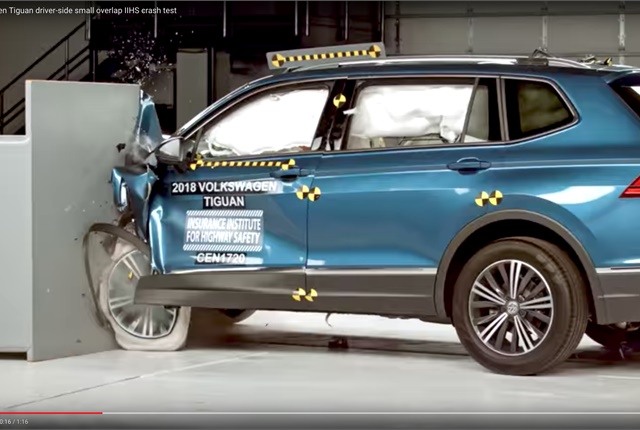 To earn the award, a vehicle must attract the highest possible rating of “good” in five IIHS crashworthiness tests: driver-side small overlap front, moderate overlap front, side, roof strength and head restraints. Moreover, the vehicle must draw an “advanced” or “superior” rating for front crash prevention.

The new Tiguan is a mid-size SUV, in contrast to the previous version that was a small SUV. The previous version also drew an IIHS rating of “marginal” in the driver-side small overlap test and had no available front crash prevention.

The 2018 Tiguan, on the other hand, performed well in the driver-side small overlap test, with maximum intrusion of less than 2 inches at the lower door-hinge pillar, footrest and left portion of the toepan, IIHS said in a released statement about the award. (To view footage of this crash test, click on the photo or link below the headline.)

"The dummy’s movement was well-controlled by the safety belt and airbags, and measures from the dummy showed that significant injuries would be unlikely in a real-world crash of the same severity,” IIHS said.

The new optional front crash prevention system earned a rating of “superior.” The Tiguan avoided a collision in the IIHS 12 mph track test. In the 25 mph track test, the impact speed dropped by an average of 24 mph. The system also includes a forward collision warning component that meets criteria from the National Highway Traffic Safety Administration, IIHS said.

The Tiguan, however, still fell short of meeting criteria for the most prestigious IIHS award, Top Safety Pick+. This award requires a “good” or “acceptable” rating for headlights. The Tiguan’s base halogen headlights drew a rating of “marginal,” while the LED headlights that come with the SEL Premium trim garnered a rating of “poor.”