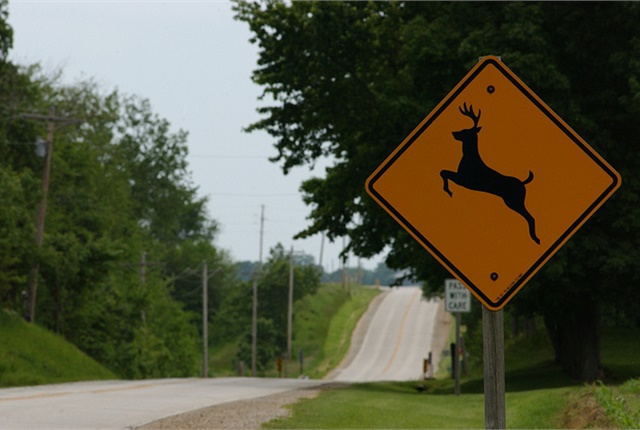 VIDEO: Dealing With a Deer Collision

West Virginia drivers remain more likely than drivers in other states to have a collision with a deer or other large animal, with roughly one out of every 43 drivers in the state filing such an insurance claim, according to an annual State Farm study.

Nonetheless, West Virginia’s latest statistic represents a 4.7% drop from 2016, the study found. Each year, State Farm releases a deer claim study that ranks states by the likelihood a driver has of hitting a large animal such as a deer, elk, moose or caribou.

The top 10 states where a driver is most likely to have a large animal collision claim have remained fairly consistent. But Wisconsin this year moved into the top five, swapping positions with South Dakota. Wyoming moved into the top 10 at number eight. North Dakota moved up to number 10. South Carolina is no longer in the top 10. Thirteen states had no change in ranking, the study found.

Mating season, which occurs in October, November and December, more than doubles the likelihood of a collision with a large animal. State Farm offers these tips to help drivers avoid such a crash:

To view a video on what to do during and after a deer collision, click on the photo or link below the headline.

On freeways in Michigan where speed limits were increased to 75 mph, crashes rose to 4,264 in 2018 — the most in five years.

In 2019, Arizona led the nation in taking legislative measures to combat drunk driving, and drunk driving fatalities fell by nearly a third, according to a new report from Mothers Against Drunk Driving (MADD).