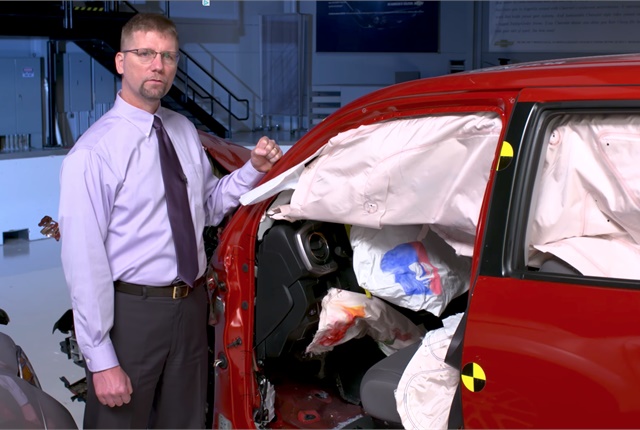 Four out of eight small pickup trucks recently evaluated by the Insurance Institute for Highway Safety earned the top rating of “good” for occupant protection in all five crashworthiness evaluations, according to IIHS.

The small overlap test replicates what happens when a vehicle runs off the road and hits a tree or pole or clips another vehicle that has crossed the center line. The Toyota Tacoma crew cab, which Toyota calls the Double Cab, was the top performer in the small overlap test, IIHS said.

The Tacoma crew cab earned a “good” rating, with top individual scores for structure, restraints and kinematics, according to IIHS. The truck also earned “good” scores for all injury measures but the lower leg and foot, for which the truck drew an “acceptable” rating.

The Tacoma crew cab was the only small pickup drawing a “good” rating for structure in the small overlap test. Results for the extended cab, which Toyota calls the Access Cab, were similar — with the exception of an “acceptable” rating for structure. Toyota re-engineered the Tacoma for the 2016 model year.

The Colorado and Canyon were redesigned for the 2015 model year. Beginning with the 2017 model year, the A-pillar, lower door-hinge pillar and door sill were reinforced to improve protection in small overlap front crashes. According to IIHS, the crew cabs’ structure and safety cage “largely resisted intrusion and preserved survival space for the driver in the small overlap test.” In the extended-cab tests, more intrusion into the driver footwell area resulted in a “poor” rating for lower leg and foot protection — compared to a “good” lower leg and foot rating for the crew cabs.

“The Frontiers are the oldest designs in this group of small pickups, with no structural changes since the 2005 model year,” IIHS noted.

Beginning with 2017 models built after February, Nissan lengthened the side curtain air bags on the Frontiers to improve protection in small overlap front crashes. The side curtain air bag protected the dummy’s head from contact with side structure and outside objects in both the crew- and extended-cab tests, IIHS said. But the Frontier’s structure also allowed “considerable intrusion into the occupant compartment, compromising driver survival space.” The footwell was pushed back toward the dummy’s legs nearly 17 inches in the crew-cab test and 14 inches in the extended-cab test.

“In a real-world crash like this, the driver would likely sustain serious injuries to the lower legs and left foot,” IIHS said.

None of the evaluated trucks are available with anything but “poor”-rated headlights, IIHS noted. The institute began rating headlights last year to encourage manufacturers to improve nighttime driving visibility and reduce glare for oncoming drivers.

The 2018 Toyota Tacoma will have a standard autobrake system with pedestrian detection and upgraded headlights that include high-beam assist.

To view an IIHS video about the pickup truck evaluations, click on the photo or link below the headline.