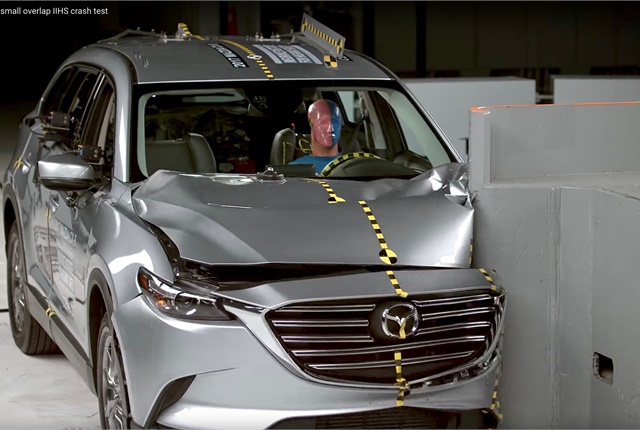 The 2017-model year Mazda CX-9 has earned the Top Safety Pick+ award from the Insurance Institute for Highway Safety, thanks in large part to across-the-board top ratings in crashworthiness tests.

To earn a 2017 Top Safety Pick+ award, a vehicle must draw a rating of “good” – the highest available IIHS crash-test rating -- in the small overlap front, moderate overlap front, side, roof strength and head restraint evaluations. The vehicle also needs an available front crash prevention system that’s rated “advanced” or “superior” as well as headlights that are rated as “acceptable” or “good.”

The CX-9 was redesigned for the 2016 model year. Beginning with 2017 models built after November 2016, Mazda modified the deployment pattern of the side curtain air bags to improve protection in front and side crashes.

Before the current model, the most recent CX-9 rated by IIHS was the 2015 model. That vehicle was rated “poor” for protection in small overlap front crashes, since the structure was seriously compromised and the side air bag didn’t deploy, IIHS said. The earlier model also came up short for roof strength, which is important for protecting occupants in a rollover crash, and for head restraints, which help prevent neck injuries in a rear crash. The SUV earned only “marginal” ratings in those tests.

The latest version of the CX-9 represents a big improvement in vehicle safety.

The “superior”-rated front crash prevention system comes on the CX-9's Grand Touring and Signature trims. Those trim levels also are equipped with the CX-9's best available headlights, which are rated as “acceptable.” Other trim levels come with headlights that drew a “marginal” rating from IIHS.

To view video footage of the Mazda CX-9's small overlap front crash test, click on the photo or link below the headline.