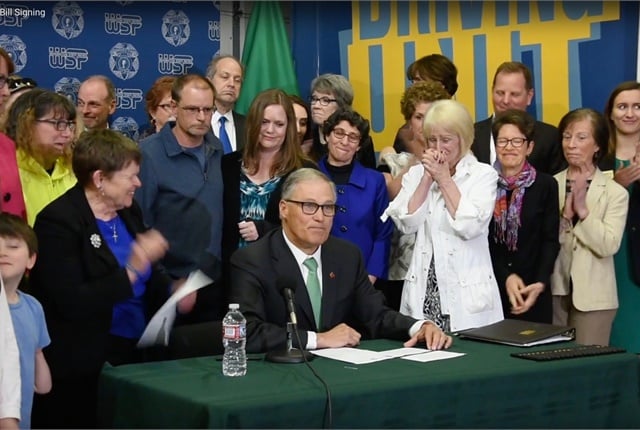 Washington Gov. Jay Inslee signs a stricter anti-distracted driving bill into law and announces he's decided to move the effective date to July of this year.

Washington State’s new anti-distracted driving law, which bans use of handheld electronic devices while driving on a public highway, goes into effect on July 23 — much sooner than legislators had originally expected.

When Washington Gov. Jay Inslee signed the bill, he vetoed a Legislature compromise that postponed the bill’s enforcement until Jan. 1, 2019. “Public safety is better served by implementing this bill this year,” Inslee stated in his partial-veto message. He signed the legislation during a ceremony in Tacoma on May 16. (To view video of the signing, click on the photo or link below the headline.)

Washington already has a driver texting ban, but the new law is broader. For example, a driver won’t be permitted to shoot photos or video using a cell phone — even while waiting at a stoplight — or to hold a device to watch a video.

The law applies to a range of portable electronic devices, including tablets and gaming systems. Drivers, however, will still be able to use a smartphone secured in a dashboard-mounted cradle or use an in-vehicle system for hands-free navigation and phone calls. “Minimal use of a finger” is allowed to activate, deactivate or initiate a device function.

The law also doesn’t apply to the use of two-way radio, citizen band radio or amateur radio equipment.

Violations of the new law will become part of the driver’s record that insurers can access and take into account when setting rates. The law, known as the Driving Under the Influence of Electronics Act, is a primary-enforcement law. As such, police can pull over a driver solely for a violation of this law — they don’t need to witness another moving violation to do so.

The law provides some exemptions for emergency workers and transit system employees, as well as for drivers summoning emergency services. Also exempted are commercial vehicle drivers using handheld devices that are required by their employer and are compliant with federal law.

Dangerous distracted driving behavior unrelated to handheld electronic devices — for example, putting on makeup or shaving while driving — will also be subject to fine when the actions interfere with the safe operation of a vehicle on any highway. But this new infraction may only be enforced as a secondary offense. The base penalty for this violation is $30, with a total fine of about $100. The $30 base penalty will be appropriated for programs dedicated to distracted driving prevention.

To learn more about the new law, click here.