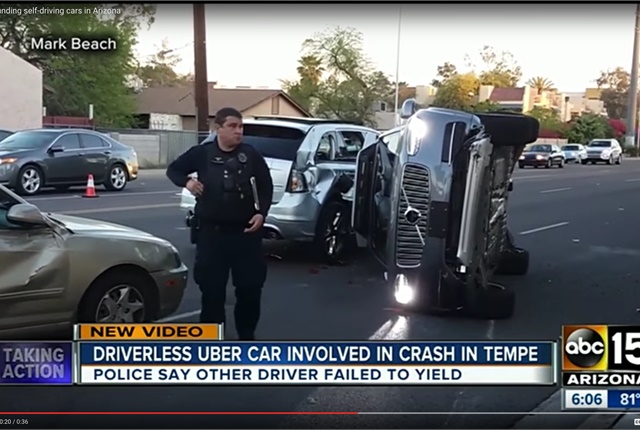 Uber’s test fleet of autonomous cars is grounded for now while the vehicle-hailing company investigates a March 24 collision in Tempe, Ariz., that left a self-driving Volvo XC90 SUV sitting on its side, according to the Washington Post.

The accident occurred at about 6:25 p.m. on Friday, March 24, when another vehicle failed to yield while making a left turn. Nobody suffered serious injuries in the crash, according to Tempe Police reports.

The driver in the other vehicle was cited for a moving violation, according to Associated Press reports. The Uber self-driving SUV wasn’t carrying any riders at the time. There were two operators in the front seat, and the car was in self-driving mode.

Uber is also working on self-driving technology for commercial trucks through its subsidiary Otto which recently suffered a setback when Waymo filed a lawsuit claiming it had stolen proprietary technology.

To view a video report about the accident, click on the photo or link below the headline.