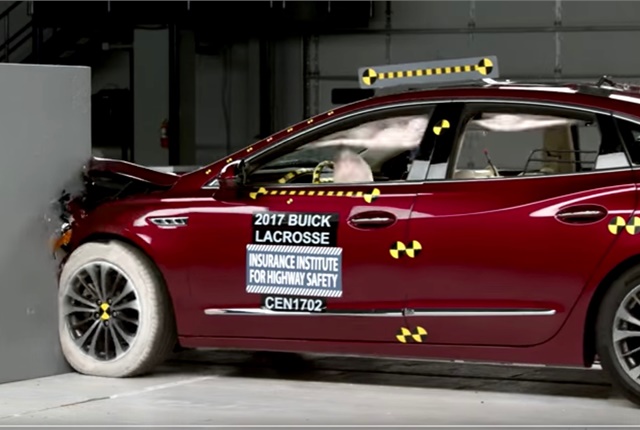 The redesigned Buick LaCrosse has earned the Top Safety Pick award from the Insurance Institute for Highway Safety.

To qualify for the honor, the car excelled in the challenging small overlap front crash test and drew the top rating of “good” in the evaluation. (To view video footage of the test, click on the link or photo below the headline.)

“The large car held up well in the test, which replicates what happens when the front driver-side corner of a vehicle strikes another vehicle or an object such as a tree or utility pole,” IIHS said in a released statement. “Maximum intrusion was 4 inches at the footrest. The airbags and safety belt worked reasonably well together. Measures taken from the dummy indicate a low risk of any significant injuries in a crash of this severity.”

The car drew a “superior” rating for front crash prevention when equipped with optional automatic braking. In the 12 mph IIHS track test, the car avoided a collision, IIHS said. In the 25 mph test, the impact speed declined by an average of 24 mph. The system also has a forward collision-warning component that meets criteria from the National Highway Traffic Safety Administration.

When equipped with an optional warning system only, however, the LaCrosse drew a “basic” rating for front crash prevention.

The IIHS Top Safety Pick award is given to vehicles with “good” ratings in the institute's five crashworthiness tests. Qualifying vehicles also must have an available front crash prevention system that draws an “advanced” or “superior” rating.

Vehicles that also come with “good”- or “acceptable”-rated headlights can earn Top Safety Pick+. But the LaCrosse’s only available headlights drew a “poor” rating from IIHS. The low beams provide inadequate visibility on the straightaway and the left curves, according to IIHS.