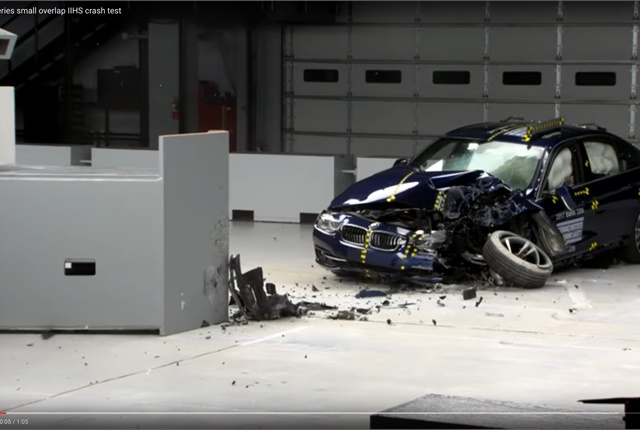 The 2017-model year BMW 3 Series has improved from a “marginal” rating to a “good” rating in the Insurance Institute for Highway Safety's small overlap front crash test. That change, along with better headlights, earned the midsize luxury car a Top Safety Pick+ award, according to IIHS.

The 2017 BMW 2 Series, another midsize luxury car, also has improved headlights and is another Top Safety Pick+ winner.

To qualify for 2017 Top Safety Pick+, a vehicle must earn the highest possible rating of “good” in the five IIHS crashworthiness tests — small overlap front, moderate overlap front, side, roof strength, and head restraints — as well as an “advanced” or “superior” rating for front crash prevention and an “acceptable” or “good” headlight rating.

The small overlap test is meant to replicate what happens when a vehicle's front, driver-side corner collides with another vehicle or an object such as a tree or utility pole. The 2016 3 Series rated “marginal” in the test because its structure didn't hold up. Intrusion exceeded 12 inches at the footrest, according to IIHS. (To see video footage of the small overlap crash test, click on the photo or link below the headline.)

Beginning with 2017 models built after November, BMW made changes to the suspension and adjoining structure. That resulted in more controlled wheel movement in the small overlap test. The structure held up better, with maximum intrusion of 6 inches at the footrest, IIHS said.

The best available headlights on the 3 Series are curve-adaptive LEDs with high-beam assist, which are part of an optional lighting package and earned an “acceptable” rating.

The 2 Series has its own lighting package, which includes “good”-rated curve-adaptive high-intensity discharge lights. Both vehicles earned “poor” headlight ratings without the lighting packages.