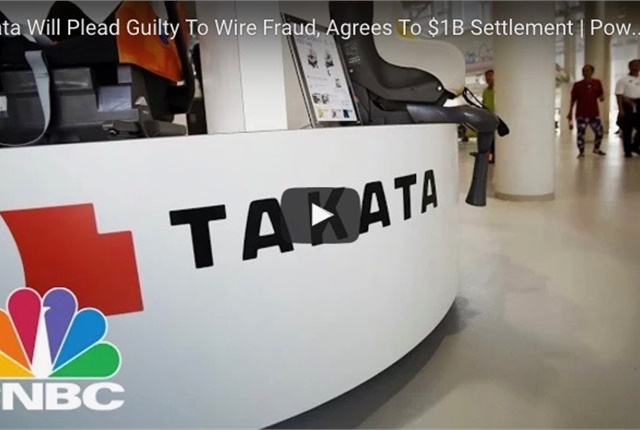 The Justice Department also unsealed an indictment charging three Takata executives — Japanese citizens Shinichi Tanaka, Hideo Nakajima, and Tsuneo Chikaraishi — with wire fraud and conspiracy. The indictment was filed on Dec. 7 in the Eastern District of Michigan. The executives are each charged with one count of conspiracy to commit wire fraud and five counts of wire fraud.

Takata Corp., based in Tokyo, is one of the world’s largest suppliers of automotive safety equipment. Defective Takata air bags, installed in vehicles made by 19 different automakers, have been linked to 11 deaths and approximately 180 injuries in the U.S. alone, according to the National Highway Traffic Safety Administration. The faulty air bag inflators use an ammonium nitrate-based propellant without a chemical drying agent. During air bag deployment, the inflators can explode and send shrapnel flying inside the vehicle.

“For more than a decade, Takata repeatedly and systematically falsified critical test data related to the safety of its products, putting profits and production schedules ahead of safety,” said Fraud Section Chief Andrew Weissmann of the DOJ's Criminal Division. “This announcement is the latest in the automotive industry enforcement actions the Fraud Section has taken to protect U.S. consumers against fraud.”

Under the terms of the settlement, Takata's $1 billion penalty includes $975 million in restitution and a $25 million fine. Two restitution funds will be established: a $125 million fund for people who have been physically injured by Takata’s air bags and who have not already reached a settlement with the company, and a $850 million fund for air bag recall and replacement costs incurred by auto manufacturers who were victims of Takata’s fraud scheme.

Takata has also agreed to implement rigorous internal controls, retain a compliance monitor for a term of three years, and cooperate fully with the department’s ongoing investigation.

To view CNBC's breaking news coverage of the settlement between Takata Corp. and the U.S. Department of Justice, click on the photo or link below the headline.