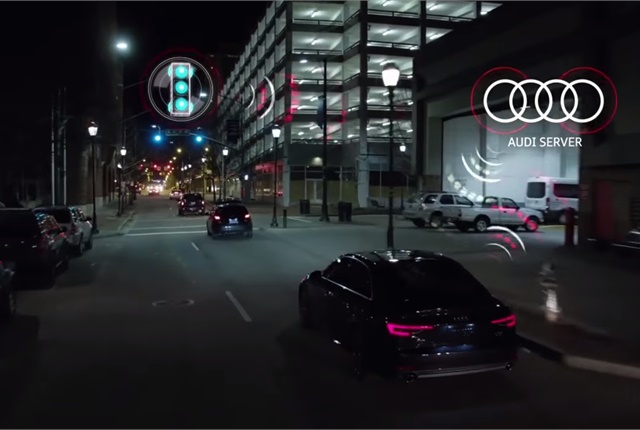 Audi of America and Traffic Technology Services this fall plan to launch a form of vehicle-to-infrastructure communications technology — involving traffic light data — on select 2017 model-year Audi Q7, A4 and A4 allroad models.

An Audi connect Prime feature, the traffic light information function will enable the car to communicate with the infrastructure in select metropolitan areas across the U.S. The car will receive real-time signal information from the advanced traffic management system that monitors traffic lights. The link between vehicle and infrastructure will be routed via the on-board LTE data connection and Traffic Technology Services servers.

While waiting at a connected traffic light, the driver information system in the instrument cluster, as well as the head-up-display (if equipped), will indicate the time remaining until the signal changes to green.

“This feature represents Audi’s first step in vehicle-to-infrastructure integration,” said Pom Malhotra, Audi of America’s general manager of connected vehicles. “In the future we could envision this technology integrated into vehicle navigation, start/stop functionality and [it] can even be used to help improve traffic flow in municipalities. These improvements could lead to better overall efficiency and shorter commuting times.”

(To watch an Audi video about the upcoming traffic light information feature, click on the photo or link below the headline.)

Now in its infancy, connected vehicle technology — encompassing vehicle-to-vehicle and vehicle-to-infrastructure communications — is expected to play a critical role in future transportation.

Ultimately, connected vehicle technology will allow vehicles, roads, traffic signals and other infrastructure — along with people’s smartphones — to share vital transportation information. These advances, in concert with deployment of autonomous vehicles, are expected to promote much greater safety and traffic flow in tomorrow's cities.

While the tried-and-true best practices of fleet safety are just as relevant as ever, the COVID-19 pandemic has created a whole new layer of challenge that fleets have had to address with regard to their safety programs.

Road Fatalities Up in March Despite Drop in Miles Driven, NSC Study Finds

There was a 14% year-over-year jump in fatality rates per miles driven in March 2020, while the actual number of miles driven dropped 18.6% compared to the same time period last year.

Teletrac Navman recently released findings from a report on driving behaviors during the first month of the COVID-19 national shutdown.

The most risky behavior reported in 2019 were cellphone/device distractions, the consumption of food or beverages while driving, drivers not using seat belts, smoking, and moments of late response.

Nauto has added a predictive collision alert module to its driver behavior learning platform that is designed to detect imminent collisions.

Traffic fatalities decreased by an estimated 1.2% last year compared to 2018.

Fleet video telematics provider Lytx shared new insights about changes in driving risk tied to the COVID-19 pandemic and associated guidelines to help control the spread of the virus.