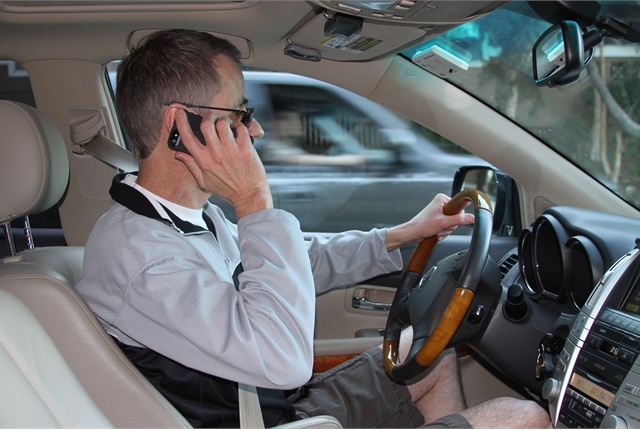 Despite the well-publicized dangers of distracted driving, the number of California motorists who use mobile devices while they drive is still on the rise, according to a new state study.

The study, conducted by the California Office of Traffic Safety (OTS) in April of this year, found that at least 12.8% of California drivers were observed using a mobile device during the day — up from 9.2% in 2015 and eclipsing the previous high of 10.8% in 2013.

Because of the difficulty of observing mobile device use in a vehicle, these figures are considered minimums, with actual usage likely several points higher, according to researchers.

“These latest numbers are discouraging, but not totally unexpected,” said OTS Director Rhonda Craft. “The number of smartphones in the United States has gone from zero 10 years ago to over 200 million today. They have become so much a part of our lives that we can’t put them down, even when we know the danger.”

“Distraction occurs any time drivers take their eyes off the road, their hands off the wheel, and their minds off their primary task of driving safely,” CHP Commissioner Joe Farrow said. “Any non-driving activity is a potential distraction and increases the risk of a collision.”

Data from the CHP’s Statewide Integrated Traffic Records System show that in 2013, 22,306 people were involved in collisions in which distracted driving was a factor. The number of distracted driving victims in California increased slightly in 2014, reaching 22,652.

Despite these numbers, drivers seem less concerned about the dangers of distracted driving. The OTS study found that the observed usage rates appear to confirm previous studies, which show more drivers admit to using mobile devices “sometimes” or “regularly.” Fewer drivers believe that talking or texting on a cell phone is a major safety problem.

Meanwhile, the percentage of those who say they have been hit or nearly hit by a driver using a cell phone remains steady at nearly 60%. Other significant findings in the observational survey include:

“The study results are disturbing,” Commissioner Farrow said. “Every time someone drives distracted, they are putting themselves, their passengers and everyone on or near the roadway at risk.”

To view a video about the study results, click on the photo or link below the headline.