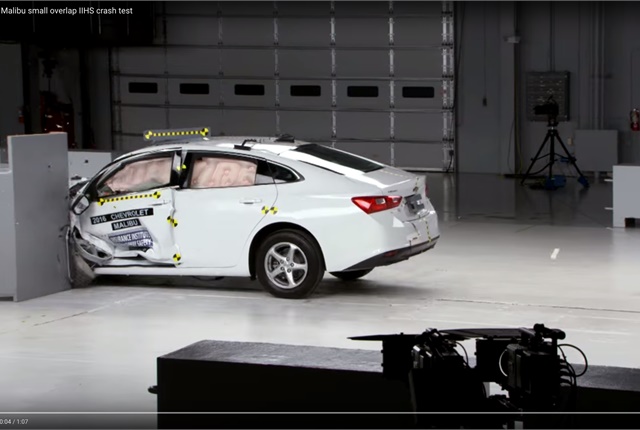 The redesigned 2016 Chevrolet Malibu, when equipped with optional front crash prevention, has earned the top award from the Insurance Institute for Highway Safety — Top Safety Pick+.

Like its predecessor, the 2016 model-year Malibu drew the highest possible rating of “good” across the board in the IIHS crashworthiness tests. These tests included small overlap front, moderate overlap front, side, roof strength, and head restraint evaluations, IIHS said. (To view IIHS footage of the small overlap front crash test, click on the photo or link below the headline.)

The mid-size car avoided a collision in the 12 mph IIHS track test and slowed by an average of 24 mph in the 25 mph track test. When equipped with only City-Speed Front Automatic Braking, the Malibu avoided a collision in the 12 mph test and slowed by 9 mph in the 25 mph test, earning an “advanced” rating, IIHS said in a statement.

The systems, both of which are optional, include forward collision warning that meets National Highway Traffic Safety Administration criteria.