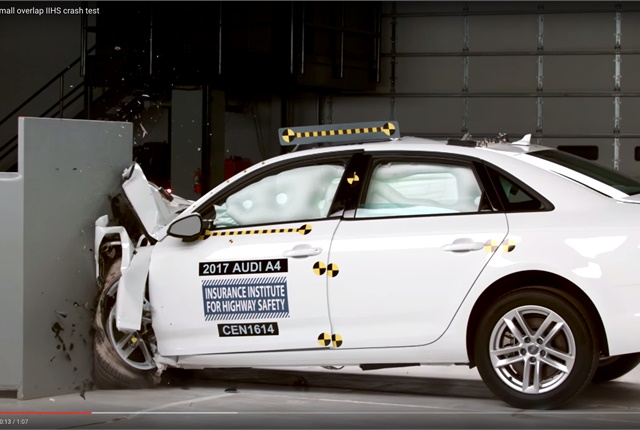 The redesigned Audi A4 has captured the Top Safety Pick+ award from the Insurance Institute for Highway Safety, after excelling in the group’s challenging small overlap front crash test.

The previous generation of the luxury mid-size sedan drew a “poor” rating in the IIHS small overlap evaluation. In that test, the structure didn’t hold up, with intrusion into the driver’s space reaching 11 inches at the footwell and the instrument panel, IIHS noted. The steering column moved toward the driver and to the right, and the dummy’s head slipped off the left side of the air bag. The driver door opened, which would put the driver at risk of ejection in a real crash.

In contrast, the 2017 A4 had maximum intrusion of only 3 inches at the footrest, IIHS said. The dummy’s head hit the front air bag and stayed there until rebound. (To view footage of this test, click on the photo or link below the headline.)

Like its predecessor, the 2017 model earned “good” ratings in the moderate overlap front, side, roof strength, and head restraint tests. A rating of “good” is the best score possible.

The redesigned model has a “superior”-rated, standard front crash prevention system — a step up from the “advanced”-rated system that was only available as an option on earlier models.

In the 12 mph IIHS track test, the vehicle avoided a collision. In the 25 mph track test, impact speed was reduced by an average of 22 mph, IIHS said.

A different, optional front crash prevention system available on the A4 also earned a “superior” rating.

The institute’s new headlight ratings aren’t yet part of the awards criteria. When equipped with LED headlights and high-beam assist, a feature that automatically switches between high beams and low beams based on the presence of other vehicles, the A4 drew an “acceptable” rating for headlights, IIHS said. All other headlight combinations on the A4 received a “marginal” rating.