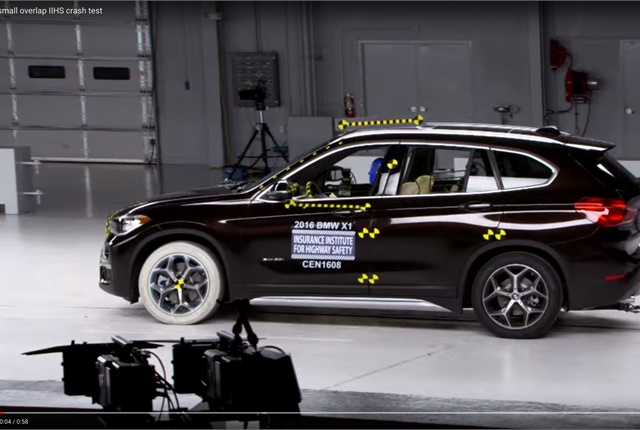 The model qualified for the honor after a redesign boosted its performance in the IIHS small overlap front crash test. Additionally, the BMW X1 has a new optional front crash prevention system that earned an “advanced” rating.

The X1 drew the highest score possible — a rating of “good” — in the small overlap test. In the test, “the driver’s space was maintained reasonably well, with maximum intrusion of about 4 inches at the lower door hinge pillar and at the instrument panel,” IIHS said in a released statement. “In contrast, in the test of the previous version, intrusion reached 16 inches at the footwell, trapping the dummy’s right foot.”

(To view video footage of the BMW X1's small overlap crash test, click on the photo or link below the headline.)

Like its predecessor, the new X1 also earned “good” ratings in the moderate overlap front, side, roof strength, and head restraint tests.

The X1’s newly available front crash prevention system performed well, too. In track tests at 12 mph, impact speed was reduced by an average of 10 mph. In the 25 mph tests, impact speed was reduced by 7 mph, according to IIHS. The system includes a forward collision warning component that meets National Highway Traffic Safety Administration criteria.

To qualify for Top Safety Pick+,  a vehicle must have “good” ratings in all five crashworthiness tests and an available front crash prevention system that draws an “advanced” or “superior” rating.