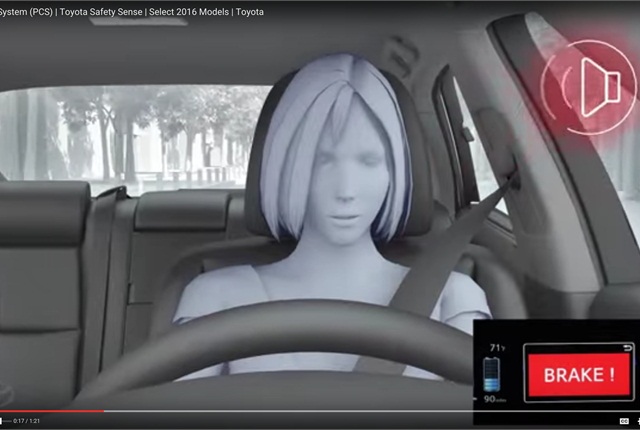 Toyota will begin to include advanced driver assistance packages — anchored by automatic emergency braking (AEB) — as standard equipment on almost every new vehicle by the end of 2017, the automaker announced.

As a result, Toyota will make AEB technology widely available four years ahead of the 2022 industry target announced last week by the National Highway Traffic Safety Administration (NHTSA) and Insurance Institute for Highway Safety (IIHS). Lexus models will include Lexus Safety System+, and Toyota models will be equipped with one of the Toyota Safety Sense packages.

“At Toyota, we are committed to creating better ways to move for everyone,” said Jim Lentz, CEO of Toyota Motor North America. “High-level driver assist technologies can do more than help protect people in the event of a crash; they can help prevent some crashes from ever happening in the first place.”

Lexus Safety System+ and Toyota Safety Sense are already available as options on a broad range of Lexus and Toyota vehicles. They’re designed to help address three key areas of driver assistance: preventing or mitigating frontal collisions, including with pedestrians; helping keep drivers within their lane; and enhancing road safety during nighttime driving.

Technologies include Toyota’s Pre-Collision System, Lane Departure Alert and Automatic High Beams. Twenty-five out of 30 Lexus and Toyota models will include Lexus Safety System+ or Toyota Safety Sense as standard equipment. Model-specific target dates for offering these active safety packages as standard equipment will be announced at a later date, Toyota said.

Models that will not offer the systems standard by the end of 2017 include the Lexus GX, Toyota Mirai, 4Runner, and 86 (jointly developed with Subaru), and Scion iA (developed by Mazda). Mirai and Scion iA currently provide pre-collision systems including AEB as standard equipment.

The Lexus Safety System+ package combines millimeter-wave radar with a camera. The result, Toyota said, is high reliability and performance.