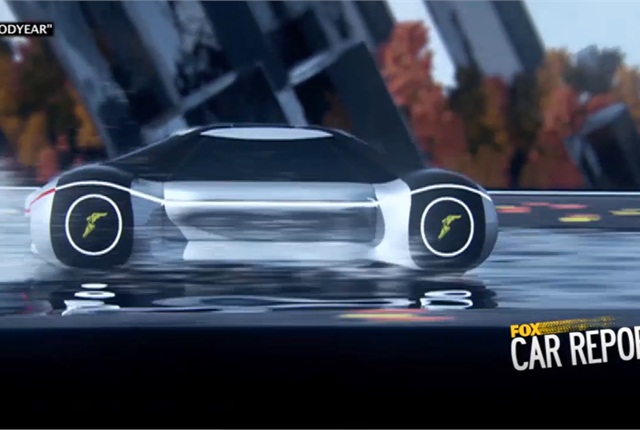 Goodyear said it designed the spherical-shaped Eagle-360 concept tire “with key features of maneuverability, connectivity and biomimicry for autonomous mobility.”

The Eagle-360 tires would rely on a magnetic levitation system to suspend the car, resulting in a smooth, quiet ride, according to Goodyear. Inspired by nature, the 3D printed tread mimics the pattern of brain coral and behaves like a natural sponge — designed to stiffen in dry conditions and soften when wet.

The IntelliGrip concept tire features advanced sensor and tread-wear technology and is designed for the earlier adoption of self-driving vehicles, Goodyear said.

Both tires are designed with safety in mind, according to Goodyear, and they reflect the company’s focus on the rapidly evolving needs of customers.

“By steadily reducing the driver interaction and intervention in self-driving vehicles, tires will play an even more important role as the primary link to the road,” said Joseph Zekoski, Goodyear’s senior vice president and chief technical officer. “Goodyear’s concept tires play a dual role in that future, both as creative platforms to push the boundaries of conventional thinking and test beds for next-generation technologies.”

The multi-orientation of the Eagle-360 spherical-shaped tire allows the car to move in all directions, enhancing passenger safety and helping drivers cope with space limitations such as tight parking lots or city streets. Embedded sensors further increase safety by communicating road and weather conditions to the vehicle control system and other nearby cars, Goodyear said. Tread and tire pressure monitoring technology regulate even wear of the 360-degree tire to extend mileage.

The Goodyear IntelliGrip concept tire is also designed to communicate with autonomous vehicle control systems to sense road surface and weather conditions. It uses advanced active wear technology to assess the condition of the tire and the vehicle. Goodyear-developed algorithms account for variables such as inflation pressure and tire temperature.

When the IntelliGrip tire senses a rainy or slippery road surface, the autonomous vehicle will adapt its speed. Additionally, the tire can shorten the stopping distance, provide a better cornering response, optimize stability and even support collision prevention systems, Goodyear said.

Goodyear added that it’s working with a number of vehicle manufacturers to further adapt this technology to their needs, enhancing connectivity with features such as electronic stability control systems, brake control systems and suspension control systems.

To view a video about the Goodyear Eagle-360, click on the photo or link below the headline.