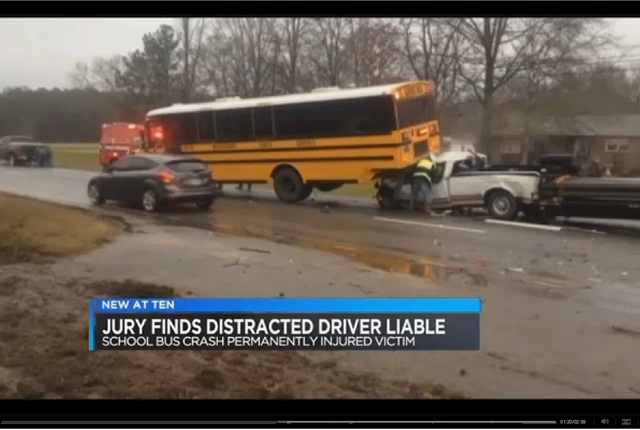 A jury in Montgomery County, Ala., has awarded nearly $1.3 million to a man who suffered life-threatening injuries in early 2013 in a Highway 231 crash, allegedly caused by a driver distracted by a work-related phone call.

Gregory Moore, an employee of McKelvey Mechanical in Tuscaloosa, was driving a rented box truck on U.S. Highway 231 in Montgomery County. A school bus ahead had come to a full stop to let out children. At the last moment, Moore swerved to avoid the bus but still clipped it, according to court testimony.

Michael Duey of Eufaula, Ala., was hauling building materials to Illinois for work, traveling right behind Moore’s box truck. Moore’s truck blocked Duey’s view of the school bus ahead. After Moore’s truck swerved over to the next lane, Duey had nowhere to go to avoid crashing into the bus, his attorneys argued. A small car was stopped for the bus on the left, and children were exiting the bus on the right.

Duey’s pickup truck slammed into the school bus and he suffered critical injuries. He was in a coma for 31 days following the collision. He suffered broken bones in both knees, a hip and left arm. No children were injured.

An onboard video camera in the bus captured footage of the collision, and Moore’s cell phone records indicated he had been on the phone with subcontractors for a government bid at Fort Rucker, according to Duey’s attorneys. They argued that Moore was too distracted by a phone conversation to stop safely, and he made Duey’s collision with the bus unavoidable. But Moore’s attorneys countered that Duey should have had enough time to stop and avoid hitting the bus if he had maintained a safe following distance.

Alabama prohibits texting while driving, but there is no handheld phone ban.

Duey’s lawsuit was filed against both Moore and his employer, McKelvey Mechanical, an HVAC contractor. The civil trial lasted nine days. The jury award was $1,272,000.

To view a video report about the court decision, click on the photo or link below the headline.