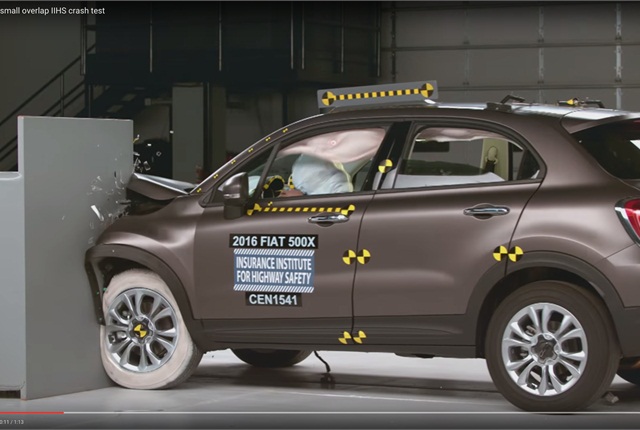 The new Fiat 500X recently earned the highest score possible – “good” -- in all five of the Insurance Institute for Highway Safety’s crashworthiness tests and drew an “advanced” rating for front crash prevention.

As a result, the small SUV qualifies for the IIHS Top Safety Pick+ award.

The vehicle is the second one from FCA US, after the Chrysler 200, to earn the institute’s most prestigious award for 2015.

“In the most challenging IIHS evaluation, the small overlap front crash test, the 500X's driver space was maintained reasonably well, with maximum intrusion of 4 inches at the door hinge pillar and instrument panel,” IIHS said. “The dummy’s head contacted the front airbag, though it then moved to the left side, leaving the head vulnerable to contact with forward structure. The side curtain airbag deployed and had sufficient forward coverage to protect the head on the left side. Measures taken from the dummy indicate that injuries to the left lower leg would be possible in a crash of this severity, but the likelihood of other injuries is low.”

(To view video footage of the small overlap crash test, click on the photo or link below the headline.)

In the moderate overlap test, the only issue was possible injuries to the right foot, IIHS noted, and there were no problems with the side crash test performance.

“The vehicle also has good head restraints and seats for whiplash prevention in a rear crash and a good roof strength rating for rollover protection,” IIHS said.

The 500X has an optional front crash prevention system that earned an “advanced” rating. In the institute's 12 mph track test, a 500X equipped with the system avoided a collision in four out of five runs, IIHS said. In the 25 mph test, the impact speed was reduced by 5 mph. The system also has a forward collision warning function that meets criteria set by the National Highway Traffic Safety Administration.

To qualify for the 2015 Top Safety Pick award, vehicles must earn “good” ratings in the moderate overlap front, side, roof strength and head restraint tests, plus a “good” or “acceptable” rating in the small overlap test. For Top Safety Pick+, vehicles also need an available front crash prevention system with an “advanced” or “superior” rating.