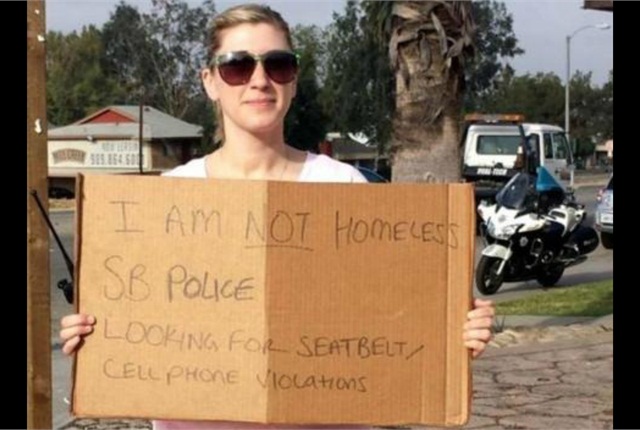 These on-foot officers held up handwritten cardboard signs identifying themselves and stating their goal of spotting seat belt and cell phone violations. But drivers in violation didn’t seem to notice – and not just because they were busy with their phones. The officers looked like panhandlers, so most drivers averted their eyes and didn’t actually read the signs being held up.

Upon observing a driver violating a cell phone or seat belt law, the officer would immediately contact a nearby uniformed motorcycle officer so the offender could be pulled over and issued a citation.

During a four-hour period, a total of 50 vehicles were stopped, according to a SBPD press release. Officers issued 33 citations for cellphone violations and 15 for seat belt violations. Five vehicles were impounded because the driver was either unlicensed or driving on a suspended license.

The crackdown was inspired by a similar operation by the Royal Canadian Mounted Police.

To watch a video report about the traffic enforcement operation, click on the photo or link under the headline.