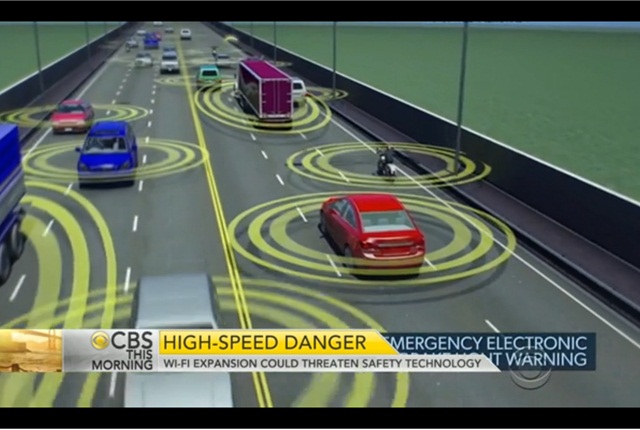 A U.S. Senate bill seeks to direct the Federal Communications Commission to decide whether an upper portion of the 5-GHz spectrum band, now reserved for vehicle-to-vehicle communications, can be shared to broaden public WiFi access.

The WiFi Innovation Act, re-introduced last month by senators Marco Rubio (R-Fla.) and Cory Booker (D-N.J.), would require the FCC to quickly test the feasibility of opening the 5850-5925 band to unlicensed WiFi use. Though the bill includes language about protecting existing licensees from harmful interference, proponents of connected-car technology have expressed concerns that sharing the spectrum might seriously hinder the technology’s future deployment.

Safety advocates and auto industry representatives, along with auto technology leaders in the academic realm, have criticized plans to impose a deadline for an FCC ruling. A hasty decision to share the spectrum could ultimately delay the rollout of crash-prevention technologies, they argue.

Both sides of the issue cite economic factors in making their case.

“America’s policies must adapt to the colossal technological advancements that are defining the 21st century and transforming the very nature of the American economy,” Rubio said. “The WiFi Innovation Act would bolster innovation, spur economic development, and increase connectivity by providing more spectrum to the public.”

The act would also establish a study to identify barriers to wireless network deployment in low-income neighborhoods. Further, the FCC would evaluate incentives and policies that could boost WiFi availability in areas where the working poor live.

Comcast and Time Warner Cable, as well as Google and Microsoft, back efforts to open up the spectrum for WiFi.

The Intelligent Transportation Society of America (ITS America), Alliance of Automobile Manufacturers, Association of Global Automakers and AAA are among the organizations that oppose the legislation.

“We are on the cusp of a revolution in vehicle safety that will save thousands of lives each year and dramatically reduce the nearly $1 trillion cost of traffic crashes and congestion to families, communities and the nation’s economy,” said Thomas E. Kern, interim president and CEO of ITS America. “Experts from the automotive, WiFi and intelligent transportation systems (ITS) industries are working together to explore whether a spectrum sharing technology can be developed to allow WiFi devices to operate in the same 5.9 GHz band set aside by the FCC for ITS safety systems without delaying time-critical communications needed to prevent crashes.”

This collaborative process, Kern said, should “continue without Congressionally-imposed deadlines, restrictive parameters or political pressure that creates regulatory uncertainty and could delay bringing these life-saving crash prevention technologies to consumers.”

The House of Representatives is also considering a companion bill, introduced by Congressman Bob Latta (R-Ohio). To view a CBS News report on the issue, which aired March 26, click on the photo or link above.