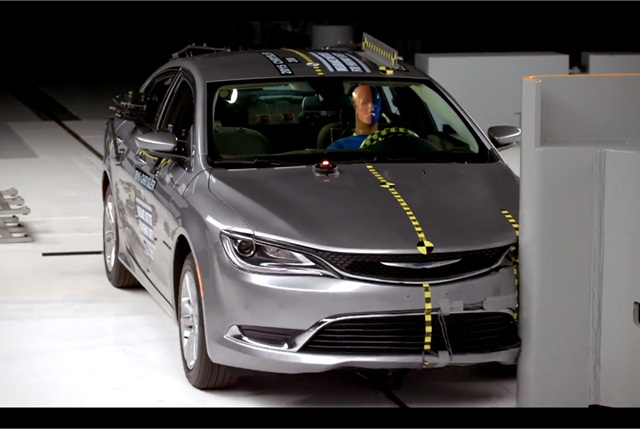 The redesigned 2015 Chrysler 200, a mid-size sedan, has drawn the Top Safety Pick+ award from the Insurance Institute for Highway Safety.

To qualify for the award, the vehicle earned the top rating of “good” in the challenging IIHS small overlap front crash test -- a step up from the previous generation's rating of “acceptable.”

In the vehicle's small overlap test, the driver's space was maintained well and "injury measures recorded on the dummy indicated a low risk of any significant injuries in a real-world crash of this severity," IIHS said. The dummy's head was well controlled by the frontal airbag, which stayed in position during the crash. The side curtain airbag deployed and had enough forward coverage to protect the head from contact with side structures.

The 200 drew a “good” rating in every measurement category for small overlap protection, including structure, restraints and dummy kinematics, and injury measures for the head and neck, chest, pelvis, and legs and feet.

IIHS added the small overlap evaluation to its testing lineup in 2012. In the crash, 25 percent of a vehicle's front end on the driver side strikes a rigid barrier at 40 mph. The test replicates what happens when the front corner of a vehicle strikes another vehicle or an object such as a tree or a utility pole.

The 200 earned a “superior” rating for front crash prevention when equipped with the vehicle’s optional forward collision warning system with autobrake, part of a package called SafetyTec.

In track evaluations, the forward collision warning system completely stopped the vehicle in the institute's 12 mph test and significantly reduced the vehicle's speed in the 25 mph test.

To qualify for the Top Safety Pick+ award, a vehicle must earn a “good” or “acceptable” rating for small overlap protection, “good” ratings in the institute's moderate overlap front, side, roof strength and head restraint tests, and a “basic,” “advanced” or “superior” rating for front crash prevention.

To watch footage of the Chrysler 200's small overlap front crash test, click on the photo or link under the headline.