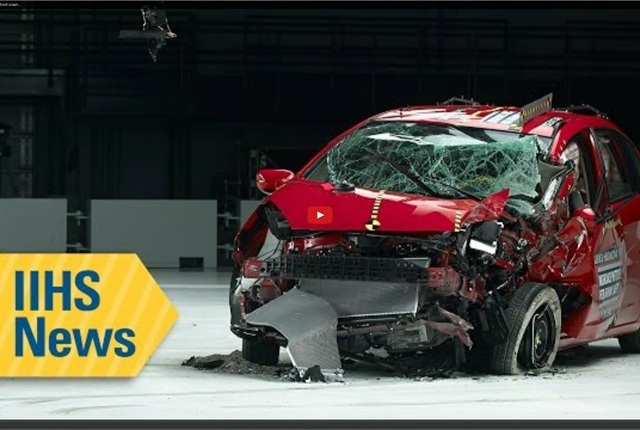 The Insurance Institute for Highway Safety recently completed testing on 11 subcompacts, and the Chevrolet Spark was the only one to draw an “acceptable” rating in the small overlap front crash test.

The Chevrolet Spark's “acceptable” rating in this particular test, along with “good” ratings in the institute's four other crashworthiness evaluations, earned the new subcompact the prestigious safety award.

The Spark was among the initial award winners announced in December. The new small overlap test results for the rest of the subcompact group mean that no other models in this size category join the Spark in the winner's circle yet.

Introduced in 2012, the small overlap test replicates what happens when the front corner of a vehicle collides with another vehicle or an object such as a tree or utility pole. In the test, 25 percent of a vehicle's front end on the driver's side strikes a rigid barrier at 40 mph.

The test is more difficult than the head-on crashes conducted by the government or the longstanding IIHS moderate overlap test because most of the vehicle's front-end crush zone is bypassed. That makes it hard for the vehicle to manage crash energy, and the occupant compartment can collapse as a result. Nevertheless, in many size categories, manufacturers have found ways to improve vehicle structures to meet this challenge, IIHS said.

"Small, lightweight vehicles have an inherent safety disadvantage. That's why it's even more important to choose one with the best occupant protection," said Joe Nolan, IIHS senior vice president for vehicle research. "Unfortunately, as a group, minicars aren't performing as well as other vehicle categories in the small overlap crash."

In contrast to the subcompact group's performance, most models in the small car category, which are a little larger, have done much better in the test. There are five “good” ratings and five “acceptable” ratings among 17 small cars that have been evaluated so far.

To view the IIHS video that summarizes the crash test results, click on the link or photo above.