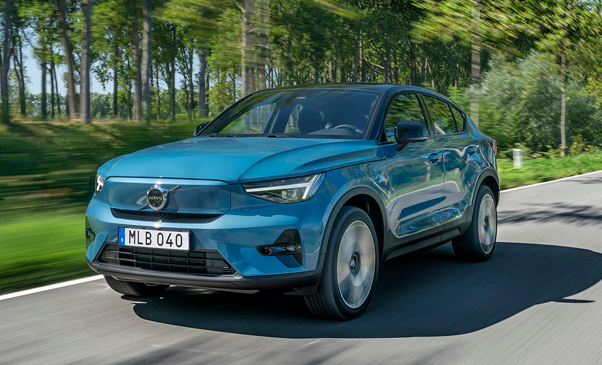 The Volvo brand is passionate about the freedom to move in a personal, sustainable, and safe way," says Erik Asplund, head of commercial fleet and rental for Volvo Cars USA. “We’re one of the most sustainable companies not just from what we say, but what we do,” Asplund notes. “And what we’re doing is really incredible.”

As Volvo anticipates a more sustainable future, incredible innovation meets incredible design in its new electric models. Known for cutting-edge technology yet beset by global supply chain shortages, every new model year features tech and tools that only ever appeared as pulp-comic sci-fi dreams. When pushing the limits of what’s possible is de rigueur in the eyes of the public, defining “incredible” isn’t so easy anymore, despite that in every decade since the 1940s, Volvo has made the incredible the norm.

The list goes on, mirroring (and often innovating) the tech at the time, all the way up to the last several years with City Safety (2009), Pilot Assist (2015), digital key (2016), and lane-keeping assist with automated steering (2017). And in the 2020s, the very engines themselves will evolve into a range of Mild Hybrid and Plug-in Hybrid powertrains, and transitioning to pure electric "Recharge" models as the brand commits to be fully electric by 2030.

Asplund also says that Volvo is always looking for fleet partners who share the values of safety and sustainability and who desire to collaboratively grow in their sustainability efforts toward electrification.

“I’m extremely excited about what some of our partnerships will bring to the industry,” Asplund says, noting that the in-car user-experience development with autonomous driving software company Zenseact and smart tech company Luminar will work hand-in-hand to provide a more convenient and safe driving experience.

That collaboration and tool has a name—Ride Pilot. Ride Pilot will build on Volvo’s industry-leading safety standards and should arrive standard on the next generation of its electric-only offerings. Ride Pilot should empower the driver to relax, drive comfortably, and engage more—not less—with the vehicle and the world it navigates.

“We are proud to announce the planned US launch of our first truly unsupervised autonomous driving feature, as we look to set a new industry standard for autonomy without compromising safety,” says Mats Moberg, head of research and development at Volvo Cars. “Having Zenseact’s brand new AD software and Luminar’s light detection and ranging technology (LiDAR) standard in our new fully electric SUV is a game-changer for Volvo Cars, as well as for automotive safety and autonomous driving.”

Testing of the new LiDAR-based technology begins soon in California.

A Philosophy of Safety

What’s often lost about electric vehicles isn’t just that they’re more sustainable, but also have the potential to be much safer as well. Asplund was pleased that the fully electric Volvo C40 Recharge compact SUV earned the coveted 2022 TOP SAFETY PICK+ (TSP+) award from the Insurance Institute of Highway Safety (IIHS).

“Safety is at the forefront of everything we do, and being recognized once more for this philosophy—especially for a new vehicle that provides so much more than simply a safe ride—is such an honor,” he says. The C40 Recharge incorporates automatic emergency braking, forward collision warning, and pedestrian and cyclist detection as standard in all vehicles. It is also the first Volvo in company history designed as pure electric only and first to feature a leather-free interior.

Volvo Cars’ vision that no one should be killed or seriously injured in a new Volvo drives the continued innovation of new safety features, including a speed cap in cars, run-off road protection, and redesigned advanced driver assistance systems (ADAS).

On a larger scale, Volvo has the infrastructure in place to support its 2030 goal of being the global electric leader. Volvo Cars recently announced a partnership with Northvolt to open a joint research and development (R&D) center in Gothenburg, Sweden, as part of its SEK 30 billion investment in development and manufacturing, creating several hundred jobs in Gothenburg and positioning Volvo as one of the few manufacturers to make battery cell development and production part of its end-to-end engineering capabilities. The plant is scheduled to begin operating later this year.

“Our partnership with Northvolt secures the supply of high-quality, sustainably-produced batteries for the next generation of pure electric Volvos,” says Håkan Samuelsson, chief executive for Volvo Cars. “It will strengthen our core competencies and our position in the transformation to a fully electric car company.”

Looking ahead, the partnership is scouting European sites for another development center dedicated to producing bespoke batteries to support Volvo drivers, partners, and fleets, boosting range and diminishing charging times. The plant’s planned capacity is to produce up to 50 gigawatt hours (GWh) per year, supplying approximately 500,000 batteries per year.

By 2025, Volvo hopes for over 50% electric sales worldwide as it pushes to fully electric by the end of the decade.

Volvo was recently recognized by environmental nonprofit CDP, scoring top marks for its emission-cutting initiatives in the name of reducing climate risk and becoming a climate-neutral company and placing Volvo in CDP’s top tier of proactive, sustainable companies.

Volvo hopes to reduce the lifecycle carbon footprint per average car by 40% between 2018 and 2025, including through reducing carbon emissions in its supply chain by 25% by 2025.

Volvo Cars is taking active steps to address emissions, including through planned collaborations with Swedish steel maker SSAB to develop fossil-free steel. The partnership with Northvolt was celebrated once more during the CDP rating announcement.

The Swedish manufacturer continues to make gains in the U.S. with its newest marques; sales of Volvo Recharge (EV and PHEV) models was up 62% in February from the previous year, and Recharge models constituted 27% of Volvo February sales nationwide, including a record 66.5% of total sales in California.