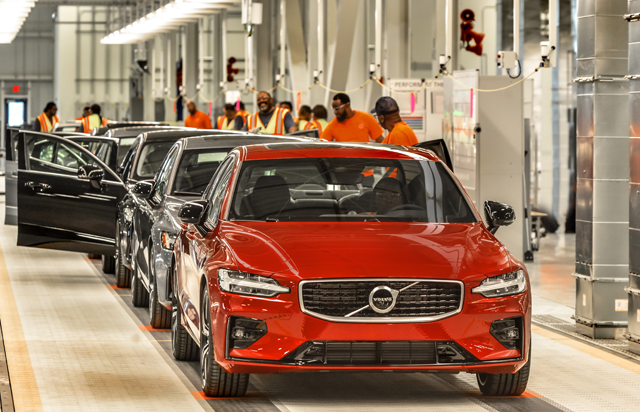 That’s the formula at the core of Volvo’s first auto plant in the U.S. The state-of-the-art facility in Ridgeville, South Carolina, began building the new Volvo S60 mid-size sedan in 2018. Now the Swedish automaker is ramping up plans to produce its next generation of vehicles in Ridgeville.

Up next, Volvo will launch the new model of its XC90 sport utility vehicle at the American plant in 2022.

Electric vehicle production is also in the Ridgeville facility’s future. This ties in with one of Volvo Cars key sustainability goals: to become a fully electric vehicle manufacturer by 2030.

By the numbers, the Ridgeville plant is impressive. Situated on 1,600 acres, the 2.3 million sq. ft. facility

For Volvo, the value of the Ridgeville plant goes beyond building cars. As the company puts it, “everything we do starts with people,” and the new facility brings a vital investment in the local community.

Ridgeville, which bills itself as “a small town with big hearts,” sits in South Carolina’s Lowcountry, about 40 miles northwest of Charleston. Now the town has joined Sweden, Belgium, and China as an outpost of Volvo Cars global manufacturing network.

For Volvo Cars, this latest location is logistically beneficial: the S60s produced at the Ridgeville plant are exported around the world through the Port of Charleston. At the same time the manufacturer, is focused on supplying demand for its vehicles in the U.S. market and contributing to the local economy.

The Ridgeville plant employs about 1,500 people. By 2022, the company expects to create about $5 billion in economic activity in South Carolina. Volvo’s impact will also extend beyond its own workforce: The plant will support an estimated 9,000 jobs paying an annual $500 million in income and benefits, according to the company.

Those local leaders are also advising Volvo as it invests further in the community. That has included a partnership with the Coastal Community Foundation, which provides grants to nonprofits and scholarships to students.

For Volvo Cars, the future is electric. As noted earlier, the company is shifting toward fully electric cars and striving to become a climate neutral company by 2040.

To that end, the latest plans for the Ridgeville manufacturing plant target the production of electric vehicles. Volvo Cars will invest an additional $118 million to build the Polestar 3 on the Volvo Car Group’s next-generation electric architecture. Polestar is the Swedish electric performance brand launched by Volvo Cars and Geely Holding in 2017.

The fully electric Polestar 3 will join the S60 and the next generation of electrified Volvo cars coming out of the same facility.

“Our South Carolina team has done a remarkable job producing the award-winning S60 and readying the plant for the next generation of electrified Volvo cars,” said Javier Varela, Senior Vice President of Engineering and Operations for Volvo Car Group. “Now, with the contract to produce the fully electric Polestar 3, we continue to expand our manufacturing operations for electrified vehicles.”

Anders Gustafsson, Senior Vice President of Volvo Car Americas and President and CEO of Volvo Car USA, added, “We are proud to bring these new growth opportunities to Ridgeville and continue to grow our presence in the United States.”